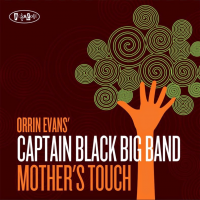 New York-based pianist / composer (and two-time Grammy Award nominee) Orrin Evans served notice with his first big-band album for Posi-Tone Records that there was an impressive new ensemble on the scene, a message that is firmly underscored by the second, the cryptically named Mother's Touch, whose tone and temperament mirror Evans' contemporary point of view.

Evans wrote six of the album's nine numbers, the first of which, the gospel-flavored "In My Soul," kick-starts the session with righteous vigor underpinning solos to match by Evans and tenor saxophonist Marcus Strickland who switches to soprano for another trenchant statement on Evans' colorful "Explain It to Me." The leader steps aside in favor of pianist Zaccai Curtis on "Mother's Touch," a seemingly unrelated two-part suite whose total playing time is roughly four minutes. Tenor Stacy Dillard, trombonist David Gibson and trumpeter Tatum Greenblatt add solos on Part I, Strickland (tenor) and baritone Mark Allen on Part II. The album's lone ballad, "Dita (for Karyn Warren)," is a charming showpiece for Evans and alto Todd Bashore.

Donald Edwards composed and Bashore arranged the lively "Tickle," which precedes Eric Revis' supple "Maestra" and Wayne Shorter's frolicsome "Water Babies." Tenor Victor North and trumpeter Fabio Morgera share solo space on "Maestra," Dillard and Greenblatt (also the arranger) on "Water Babies." The spirit is far removed from reverential on Evans' buoyant finale, "Prayer for Columbine," whose glossy tone abets elastic solos by Allen, Dillard, trombonist Conrad Herwig and alto Tim Green. It's a pity that Evans doesn't solo more often, as he is a daring yet good-natured stylist in the manner of McCoy Tyner, Roger Kellaway and one of his mentors, Kenny Barron. He seems, however, content for the most part to play a supporting role and let the ensemble take the lion's share of the bows and applause.

Be that as it may, Evans' purposeful imprint is all over the album, as it was on the band's inaugural recording some three years ago. He is Captain Black, and the ensemble is an extension of his perceptive musical philosophy and personality.