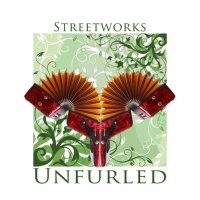 Women in British jazz, the stand-out sonically wonderful ones, you just don't hear them all too often, and finding them is like chasing unicorns. Outside of stoic jazz hoovers there are still too few mainstream listeners who suck it up these days, and that never helps. In the popular world of musical vacuum, perhaps the only answer budding jazz musicians ever hear is, "Die son." (The popular vacuum -looks good, it's clumsy, over-priced, breaks easy and does half a job). Thankfully, Karen Street has no time for housework; she's too busy digging the street, maintaining the foundations; holding the joints up.

Listening to Unfurled the title song is a real head turner, it's unfurling at 1:01 seconds is sublime. Outside of Astor Piazzolla, the Gotan Project, Richard Galliano and their acco-ilk one can lose accord with accordion pretty early on. Not so here. The combination of Karen Street's lyrical compositions with her responsive and unique accordion playing is classy, spritely stuff. Not to short change Andy Tweed's saxophone skills either, which are cut like De Beers -imagine a Brit tinged folk-lite Bill Evans (saxophone) with flashes of Andy Sheppard.

"Dancer" is a quintessential French town square romancer, think Jean Reno as the Gru (Despicable Me) following Marion Cotillard like a lovesick puppy. "My Next Trick" is accordion bellows, like a swaggering drunk Gallic sailor, an impression augmented by Will Harris' walking bass. The sax melody brings the upbeat funk, a big New Yorkness sax sound, a beefy blues. Mike Outram shines up a virtuoso solo with essence of Lee Ritenour. Bring out the Bourguignon.

"Ode" begins dirge like and sombre, followed by some sympathetic saxophone. The story expands, the guitar flies in some fancy licks not to be outdone. The reviewer first notices that the band doesn't have any drums or piano. The song continues unhindered. "Tantrum" begins with minor heat from accordion and bass. Guitar and sax keep a gentle council while the accordion throws a controlled tantrum. The sax wrecks the shop at 2mins 30sec, it's a pleasant, almost comical interpretation of a tantrum from the outside looking in. The guitar has the last laugh holding it together throughout.

In "No.255" the guitar and bass footsie the 'Don't stand so close to me' and in chimes accordion, feels like the quality of the old Windham Hill compilations. "Beluga in the Bierkeller" begins with swellsome accordion, dripping gold sax of the Andy Sheppard school of sensation...She had a thing for Bavarian fish dishes at 12:15pm, he liked to take a taxi in lunchtime traffic, "Je préfère les hommes incorrect" and all that Beluga.

"The Last Mile" that moment when the car is running out of the last bar on the fuel meter, when you need the loo, need to be wherever on time....captured in perfect sonic anticipation by sax, accordion and bass. Outram has moments of the same energy as Martin Taylor or George Benson. A jolly stroller, that's perfect for the later- lifers dating on diuretics, when you got to go—you got to go.

"Peace" with a bass intro summarised in the immortal tunage of Ron Carter's title "That's Deep." Lingering and lasting, each band member has their own unique statement on what Peace is, from the bluesy Jimi Hendrix inspired guitar solo to the gliding sax eagling.

Lady Street is a beast for bringing this band into being, Streetworks are a heart-warming construction necessary on all good highways.

Unfurled; Dancer; My Next Trick; Ode; Tantrum; No.255; Beluga in the Bierkeller; The Last Mile; Peace.