Wee Willie Walker: If Nothing Ever Changes 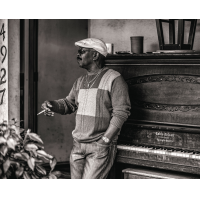 Amidst all the hype, posturing and polished glam in today's music industry, when an unpretentious soul singer rises to the occasion and steps up to the microphone, it is a joyous occasion. With impeccable gospel, R&B, and soul credentials, vocalist Wee Willie Walker has been paying dues since his first recording for Goldwax Records in 1967. After shuffling between Memphis and Nashville, he wound up and persevered in the Minneapolis music scene, singing for various acts, and in 2002 put out a self-titled record, leading to fronting local band The Butanes. This association resulted in a series of records, and several tours abroad, yielding the opportunities to keep himself in top performance shape. In 2013 he released an album of covers with guitarist Paul Metsa, done in a laid back duo format. He was prime for a major comeback effort.

If Nothing Ever Changes brings Walker into the studio with a solid line up of premier musicians and fresh material to showcase his remarkable ability to deliver songs in the classic retro soul style which has become his trademark. Produced by harmonica man Rick Estrin of The Nightcats fame, this record is another in the small but growing catalog of The Little Village Foundation, a new label specializing in notable acts worthy of further acknowledgment, founded by keyboardist Jim Pugh, who also plays on the record.

It is clear from the opening intro of "Read Between The Lines" that this is a no nonsense production burning like a coal fired freight train. Walker comes out swinging and does not let up. They flawlessly slide into a ballad version of the Beatles "Help!" which also features vocalist Curtis Salgado, before turning it back up on "Everybody Meets Mr. Blue," complete with flashes of horn arrangements from the Otis Redding songbook. Great care and thought was taken behind the song selections which covers perfectly the wide range of expressions that Walker can interpret successfully. He brings it way down with the original "Not That I Care," a gut wrenching reflection on self-denial gone wrong. It's in those slower ballads as "What Love Can Do," and "Nothing Ever Changes," where the true soul singer comes into his own and the pretenders are quickly weeded out, for it takes an innate talent and ability to tell the story with credibility and heart felt emotion. Walker proves he's got what it takes and puts it on the line, and though provided with appropriate material, it's the singer not the song.

Special mention is in order for the impeccable musicians who played on this project, for they captured the legitimate feeling essential for this music. Recorded in Kid Anderson's Greaseland Studio in San Jose, California, noted for its raw and accurate approach in recording techniques, If Nothing Ever Changes shines as a beacon of hope in the survival of genuine soul music.

Read Between The Lines; Help!; Everybody Meets Mr. Blue; I’ve been Watching You; Not That I Care; Is That It; I Don’t Remember Loving You; Funky Way; What Love Can Do; Hands Of Time; If Nothing Ever Changes; Hymn For Lonely Hearts.

Title: If Nothing Ever Changes | Year Released: 2015 | Record Label: The Little Village Foundation