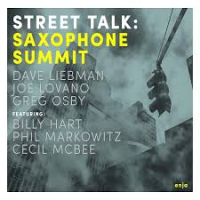 Since coming together in 1999 to celebrate the late-period work of John Coltrane, the aptly named Saxophone Summit has lost only one original member. Michael Brecker passed in 2007 and was replaced by Ravi Coltrane, who has in turn been replaced by Greg Osby. The other principals, Joe Lovano and Dave Liebman, are unchanged, as is the accompanying trio of pianist Phil Markowitz, bassist Cecil McBee and drummer Billy Hart.

As its name claims, the ensemble is indeed an assemblage of masters, and its fourth album, Street Talk, is a delight; a celebration of the jazz saxophone as much as it is of the group's founding inspiration.

The carnivalesque title track was written by Lovano for his 1991 Blue Note label debut, Landmarks. It is one of the six originals, one from each band member, which, topped and tailed by brief saxophones-only improvised passages, make up the track list. Saxophone Summit's first two albums—Gathering Of Spirits (Telarc, 2004) and Seraphic Light (Telarc, 2008)—included group originals but revolved around pieces written by John Coltrane. By the time of its third album, Visitation (ArtistShare, 2014), Saxophone Summit had moved on from covers and was performing originals only.

"The Coltrane influence is alive in Saxophone Summit," says Liebman of the new album, "but we've steered away from it as a representation of the group. We keep that spirit, and play tunes with that vibe or feel, but it's our own music." The spotlight shifts between a light-footed acapella solo (Liebman on "Loudly," his contrafact of "Softly As In A Morning Sunrise," recorded by Coltrane at the Village Vanguard in 1961 and the nearest the album gets to a Coltrane cover) to shamanistic group improvisations.

Markowitz, McBee and Hart are crucial to the album's success throughout, delicate or ferocious as appropriate and, after two decades together in the boiler room, moving as one.