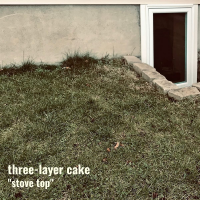 If nothing else, the trio of Mike Pride (drums, marimba, glockenspiel, bells, organ), Brandon Seabrook (guitar, banjo, tapes) and Mike Watt (bass) deserves a "truth in advertising" award, because Stove Top, their first collaboration, is precisely that: a three-layer instrumental cake.

Stove Top began cooking when Pride appeared as a guest on Watt's podcast. Suspecting their musical connection, Pride recorded a series of drum tracks and sent them to Watt, who laid down matching bass tracks and then sent both layers to Seabrook to finish. "I knew Brandon was a big fan of Watt's and kind of carries a lot of that ethos that Watt carries around in his own work," Pride explains. "I thought it would be musically cool and karmically cool to connect those two guys." (Two slices were prepared differently: Seabrook laid down the first layer to "Shepherds" and Watt the foundation for "Ballad of the Gobsmacked.")

Plotting the musical histories of Pride, Seabrook and Watt on a graph chart would resemble a seizure: Pride leads several of his own ensembles and has worked with iconoclasts from Anthony Braxton to Millions of Dead Cops; Seabrook has worked with Braxton, Nels Cline, and leads the Seabrook Power Plant; and Watt has bounced from the Minutemen and Iggy and the Stooges into more recent engagements with Henry Kaiser, Vinny Golia and others for electric reinventions of John Coltrane's milestone A Love Supreme (Impulse! 1965).

"Big Burner" busts up a lot of hard rock in less than three minutes: Drums crunch out a straight-on beat and pop off firecrackers as unaccompanied fills, electric guitar saws off curt, brusque chords and lines in spasms of melody and rhythm, and bass draws thick rubbery lines that tie everything together in a hard knot. "I love the fact that this record is improvised but there are parts of it that are very composed and complex, and that everything still sounds like a rock band," Pride explains. "It doesn't sound like some jazz dudes putting on the rock hat."

While the title of "Big Burner" suggests an AC/DC or ZZ Top B-side, the title of "Luminous Range—Anxious Valve" seems like it was randomly picked out a machine repair manual. At the beginning, Pride's pinwheeling, rolling sound suggests Elvin Jones; but as he begins to drop more heavy beats into Seabrook's itchy, scratchy guitar rhythms, Watt's stomping funkmonster basslines both cleave and connect the guitars and drums so tightly that the second half of "Big Burner" sounds pre-written.