Steven Wilson: Get All You Deserve (Limited Deluxe Edition)

By JOHN KELMAN
October 1, 2012
Sign in to view read count 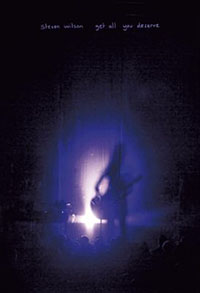 Steven Wilson
Get All You Deserve (Limited Deluxe Edition)
Kscope
2012

When Steven Wilson decided to go solo after fronting the popular progressive/psychedelic group Porcupine Tree for 20 years, it was an opportunity to stretch beyond the confines that he'd ultimately created for himself in a group that also began as a solo project, albeit not under his own name. PT may have ultimately been his band but, as he said in a 2012 All About Jazz interview:

"When you have a group of musicians, you're inherently a democracy; the area you all meet on is, by definition, relatively small. By that I mean the area upon which we can all agree—this is the kind of music that we want to play—becomes relatively small. And that, in a way, is what gives the band its identity. And I'm not knocking it. I'm not saying that this is necessarily a bad thing."

Still, unshackled by the inherent confines of a band and, perhaps more importantly, a brand, Insurgentes (Kscope, 2009) gave Wilson the freedom to expand and integrate his "love of noise music, industrial music, electronic music and drone music" within a more complex progressive music that Porcupine Tree would simply have been incapable of executing. An even greater step forward, the double-disc Grace for Drowning (Kscope, 2011) was clearly informed by the singer/guitarist/keyboardist's work remixing, amongst others, the majority of the King Crimson catalog for surround sound, in particular Lizard (DGM Live, 1971), the progressive rock group's "problem child... an album that stereo could not contain."

Wilson's reach has continued to grow as both a writer/performer and as the "go to guy" for surround (and, in many cases, new and equally revelatory stereo) mixes for other legacy groups including Jethro Tull, Emerson, Lake & Palmer and Caravan—in addition to providing the same service to new releases from contemporary groups like Opeth and Anethema. But more than the sum of its parts, what's elevated Wilson's own music to a level even he could not have predicted has been the serendipitous formation of a band so exceptional that, as of this writing, he's back in the studio recording his third solo album—the first to feature new material written specifically for and performed exclusively by this band—and gearing up for a tour that will take up most of 2013.

The band's 2011 tour, in support of Grace for Drowning, hit Montreal late in the fall, and was exhilarating evidence of a collective that—with many of its players coming from backgrounds in jazz and improvised music, and despite playing largely structured and choreographed music—lent Wilson's music even greater depth and breadth; the consequence of an improvisational spirit and a deeper, more sophisticated language. It was one of the year's best shows, and Get All You Deserve—recorded five months later in Mexico City—is the perfect document of a band at its relative inception. Unlike the Montreal show, It also provides a sneak peek into the new record, with a live version of the 12-minute, episodic "Luminol" being road tested with stellar results.

Get All You Deserve comes as either a DVD, a Blu-Ray or a Limited Deluxe Edition, which includes both video formats as well as the entire two-hour concert—minus the intro and outro, taken from Wilson's ambient/drone project, Bass Communion—on two CDs, in a slip-cased, hardback DVD-size book with 40 pages of tour photos, information and a brief liner from Wilson. It's further evidence of his commitment to more than just the music; not unlike Germany's ECM label, of which he's a fan, Wilson sees a bigger picture, one where the music is released in packages that are also aesthetically beautiful—things to have and to hold, as much as to hear and see. Directed and edited by Lasse Hoile—whose distinctive style has created a visual branding of sorts for Wilson and Porcupine Tree since first teaming up for the cover of In Absentia (Lava, 2002)—his approach may rankle those who take issue with fast cuts, but in the context of music where there's a lot happening across the stage all the time, it ultimately works to engender the same kind of exhilaration as actually being there.

For those who own Wilson's limited-run (3,000 copy) live CD, Catalog | Preserve| Amass (Self Produced, 2011)—sold at shows during the 2011/12 tour and, briefly, at his website; a single, 70-minute disc that features half of Get All You Deserve's fourteen tracks, recorded at earlier shows—it's an opportunity to compare and contrast, and to really appreciate exactly what woodwind multi-instrumentalist Theo Travis, keyboardist Adam Holzman, bassist/stick player Nick Beggs and drummer Marco Minnemann bring to this music. Here, Niko Tsonev replaces Catalog's Aziz Ibrahim—both fine enough guitarists capable of delivering the parts and textures required, but simply not as exceptional as the rest of the band. This was, however, only Tsonev's fourth date with the band, making such criticism a tad premature, perhaps. Still, Tsonev's recent replacement by Guthrie Govan will hopefully bolster the band's one as-yet-impermanent position.

Simply comparing the two versions of the irregularly metered opener, "No Twilight Within the Court of the Sun"—with Minnemann the first one to enter and bolstering Wilson's assertion that "Marco is incapable of playing the same thing the same way twice"—makes clear just how essential this band is in making each night a thoroughly different experience. Beyond their entrances onstage (clearly not at the same point each night) there are moments, like when Holzman shifts from Rhodes to acoustic piano (sample) and Minnemann and Beggs kick into double time—something they don't do on Catalog—that make it particularly revealing to hear multiple versions of the music. Perhaps even more significant, however, is that the song is taken at an overall faster clip on Get All You Deserve, meaning that Wilson and his band are not playing to a predefined click track, which has become commonplace with so many of today's live rock performers.

Instead, what Wilson delivers with Get All You Deserve is modern progressive rock played with an old school aesthetic, one that takes advantage of something else the genre exhibited in its nascency—players often trained in classical and jazz, but who decided to do apply themselves to an electrified context. Holzman's piano solo intro to Grace for Drowning's "Deform to Form a Star" (surely the most heartbreakingly beautiful song Wilson has ever written) is a mesh of classical constructs and freewheeling, Chick Corea-isms, while Travis' flute playing on the kick-ass "Luminol" may, if not exactly dethrone Ian Anderson as the king of rock flute, at least makes clear that there's someone else who, speaking with a greater jazz vernacular, deserves to be held in the same high regard. Despite his early, synth-laden days with trumpet icon Miles Davis, here Holzman is all Fender Rhodes—gritty, tremeloed and, at times, ring modulated—and acoustic piano, though there's plenty of symphonic mellotron, and he throws in some Jan Hammer-like guitaristic synth on "No Part of Me," which starts in softer progressive pop territory, but builds to a fever pitch, with Travis delivering his most searing saxophone solo of the set.

But for all the improvisational spirit—the jazz spirit—that the group brings to Wilson's music, it's absolutely not jazz. Fans would be hard-pressed to find a jazz record with the mellotron-driven grandeur of the last section of "Luminol," while the epic, 25-minute "Raider II" that closes the set is, if not exactly a mirror to the second side of King Crimson's Lizard, certainly inspired by its longer form and overall shape (including its foreboding finale), albeit filtered through Wilson's expansive prism. Beggs, who is the only player lacking (not that it matters) overt jazz credentials—a founding member of 1980s Brit-pop group Kajagoogoo and bassist/stick player for ex-Genesis guitarist Steve Hackett—is no less an equal to Travis and Holzman His pliant, open-eared and open-minded interaction makes him the fulcrum over which Wilson's band rests, driving the last half of the brooding "Index" and, together with Minnemann, completely transforming it with a groove the studio original simply did not possess.

Minnemann is truly a force of nature, a drummer whose mind-boggling dexterity is matched only by his dynamic breadth. He may drive the more metallic parts of "No Twilight" with a thundering double bass drum figure, but when Wilson's vocals enter, he pulls the volume down—way down—without losing the essential pulse. In his solo intro to the same song, he plays with the kind of impeccable time that simply doesn't need a click; even when he leaves big gaping holes, if there are any minor fluctuations, they only serve to make things more organic, more human.

Paul van der Heijkant's lighting, Lasse Hoile's rear projection screen visuals and Wilson's own onstage presence—charismatic, without detracting from his band mates when eyes should be on them—maintain the pace of the entire set without any of the lulls that are difficult to avoid in a concert of this length. And for those with a surround sound system, Wilson's surround sound mix recreates the live show's ambience, where gradually increasing noise at the end of the encore/title track (the penultimate song on Insurgentes) doesn't just come at you, it completely surrounds you.

At a time when progressive rock has, in many ways (and as undeniably fine as some of its contemporary proponents are), solidified into something which has lost sight of what it once was—truly "progressive" music—Wilson has been fighting the good fight to bring it back, honoring its roots while remaining completely in the here and now, supported by a band playing with in-the-moment immediacy. Get All You Deserve may document of a band in its relative nascency, but it's also an unmistakable signpost of even better things to come. An absolutely thrilling ride by one of the best progressive rock groups on the planet, it's a compelling teaser for Wilson's forthcoming studio record and tour. If the band was this good after only 24 live dates, then it's a safe bet that 2013 is going to be a truly memorable year..