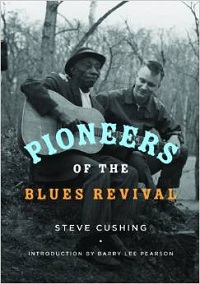 "Pioneers of the Blues Revival documents the efforts of a quirky set of researchers who slowly pieced together a version of blues history and meaning. This dedicated cohort, despite their widely different backgrounds, somehow brought together the skill sets necessary to create a literature based on blues research. Some would say that in the process the reinvented the blues in their own image. Regardless, their work affected mass culture perception of blues. For many, this may not be viewed as such a benign project. It could also be seen as the story of how a group of record collectors and researchers codified and appropriated a living African American art form, removing its vitality for the sake of organizing and then selling the products."

Barry Lee Pearson, from the Introduction to Pioneers of the Blues Revival

Such was my experience when meeting the "true believers" in Oxford, Mississippi, thirty years ago. The Oxford blues community at the time hosted the likes of Jim O'Neil and Dick Waterman, but the true believers I refer to were part of staff the Blues Archive at the University of Mississippi. This was a group dedicated to the preservation of the blues exactly as it was played by its practitioners. If one song had 13 measures in one (as recovered from a 60-year old 78 rpm record) instead of 12, then that is how the music should be played. However, many of the white guitar players emerging from this miasma of collecting, recording and writing that resulted in the late 50s and early 60s, cleaned up this idiosyncratic playing making it mathematically congruent with our understanding of music from the Western Classical tradition: every line equal, every turnaround and coda, the same. This was the first level, I experienced what Pearson was calling, "codify[ing] and appropriate[ing] a living African American art form." This definitely happened as any late-Baby Boomer guitarist who grew up listening to Eric Clapton before discovering Skip James.

Perhaps the manner in which the blues was part and parceled into a revered and lasting art form was not a "benign project." The interviews in Steve Cushing's Pioneers of the Blues Revival reveal that, at times, this "project" was fraught with in-fighting and competition between the major participants. It was also marked with considerable amiability and cooperation...just the way humans behave: all compassion, charity, greed, exploitation, benevolence, avarice, neglect and triumph.

Cushing's book, a collection of interviews he conducted with the most famous living participants giving genesis to the "blues revival," is the latest in a second generation of blues scholarship that began with Elijah Wald's Escaping the Delta: Robert Johnson and the Invention of the Blues (Amistad Press, 2004), Marybeth Hamilton's In Search of the Blues (Basic Books, 2010), Daniel Beaumont's Preaching the Blues: The Life and Times of Son House (Oxford University Press, 2011) and Amanda Petrusich's Do Not Sell at Any Price: The Wild, Obsessive Hunt for the World's Rarest 78 rpm Records (Scribner, 2014).

A central theme to this second generation of blues writings is the necessary correction of the romantic excesses of the first generation, something one of its members, Samuel Charters, readily admitted was present in his landmark The Country Blues (Reinhart, 1959). Additionally, there is the aesthetic and economic analysis of the effect of this movement in both the European-American's and African-American musical communities and cultures. All this said, the fact remains that the history is established and the only thing up for debate is the interpretation of that history. What do we have? We have the blues.

A brief diversion into blues taxonomy.

Robert Johnson was not a seminal delta blues musician from whom a river of talent and culture emanated. He was an itinerant musician who travelled and performed widely, made a few records, sold even fewer, evaporating into nothingness, making him a phantom. Johnson was a member of the first generation to learn more from recorded music than from live performance (though he did experience the music live as a matter of conventional wisdom). What Johnson was, was a brilliant guitarist and synthesizer of all the music he heard. He recorded twice in Texas, in 1936 and '37. He left a brief and classic collection of music. But he was in no way the beginning. He was the affection of a group of earnest, if not eccentric, autodidacts who invented him as something he wasn't, a strangely alchemic modern Noble Savage crossed with Dr. Faustus.

The ur-blues was recorded well before Johnson entered the studio. The famous twelve-bar format was recorded as early as twenty years before Johnson Recorded. The Original Dixieland Jazz Band, a group of white New Orleans musicians recorded "Livery Stable Blues" for Victor on February 26, 1917. But this is certainly not the first time these sacred twelve bars were played. Another phantom, Buddy Bolden, was playing them as early at 1895. Sadly, no recorded evidence exists, though an Edison cylinder has been spoken about. W.C. Handy was vaccinated with what would become the rural Delta Blues at the Tutwiler, Mississippi train station around 1903 when he awakened from a brief nap by:

"... a lean, loose-jointed Negro [who] had commenced plucking a guitar beside me while I slept. His clothes were rags; his feet peeped out of his shoes. His face had on it some of the sadness of the ages. As he played, he pressed a knife on the strings in a manner popularised by Hawaiian guitarists who used steel bars.... The effect was unforgettable. His song, too, struck me instantly... The singer repeated the line ("Goin' where the Southern cross' the Dog") three times, accompanying himself on the guitar with the weirdest music I had ever heard."

But "The Memphis Blues" (1912) is not strictly the blues, sporting a flamenco bridge in the middle. That same is true for "St. Louis Blues" (1914). But the some of the elements are there. Mamie Smith recorded "Crazy Blues" (Okeh, 1920) which was more in the vein of New Orleans jazz of the period. It has been proposed that the Delta Blues worshipped by so many resulted from the modest circumstances of the Delta musicians and the easier availability and portability of guitars. The majority of what we consider rural blues musicians played many more styles of music than the blues as would have been dictated by a demanding public wanting popular songs of the day.

There are caveats to this list. While Patton, House, Johnson, and Brown may be classified as the "traditional" rural blues style, James and Hurt are outliers from that tradition. James played both guitar and piano (in an eerily similar manner). His guitar playing was characterized by playing in a Dm tuning and became known as the "Bentonia School" (after James' hometown and doubtless assigned by a white enthusiast) characterized by an elaborate finger-picking, often two-chord style. Hurt was something else altogether. He played in a syncopated, alternating thumb-picking style that had more in common with the "Piedmont School" of blues than the Mississippi Delta. Hurt thought of himself as more of a "songster" that a blues musician.

For our purposes, we might consider these musicians as the first generation of blues musicians. In a parallel way, we can view with objects of Cushing's interviews in the same way. The early scholarship was done by Paul Oliver and Samuel Charters, each of who were responsible to some early writing on the subject. Oliver authored Bessie Smith (Cassel, 1959) and Blues Fell this Morning: The Meaning of the Blues (Cassel, 1960) and several other important blues texts. Charters kicked things off this his seminal book Country Blues (Rinehart, 1959) and an accompanying LP of the same name.

From there comes the collectors/producers Pete Whelan (who answered Charters' The Country Blues with his own Really! The Country Blues (OJL, 1962)), Dick Waterman and Phil Spiro (instrumental in finding Son House), Gayle Dean Wardlow, and Richard Spottswood. These were the explorers, discoverers, and producers. These interviews reveal little new but are riveting (as in Phil Spiro's account of finding Son House).

A second group, centered in Chicago, includes Jim and Amy O'Neal, Ray Flerlage and Bob Koester. Their interviews were the most interesting as they focused on the development of blues talent after Muddy Waters, Howlin' Wolf and the Northern migration in the 1940s. Junior Wells and Magic Sam loom very large in their stories, as well as Otis Spann, Roosevelt Sykes, JB Hutto, JB Lenoir and James Cotton. Koester's interview is easily the best of the bunch as he detailed the history of Chicago's Jazz Record Mart and Delmark Records. Koester makes clear how and why Hoodoo Man Blues (Delmark, 1965) and West Side Soul (Delmark, 1967). Jim O'Neal worked with Koester in Chicago and with the then Amy Van Singel founded the magazine Living Blues before moving to Oxford, Mississippi in the 1980s after allowing the University of Mississippi take over operations. Oxford in the 1980s was a heady place with the O'Neals, Dick Waterman, authors Willie Morris, Larry Brown and Barry Hannah, and musicians James "Son" Thomas and Walter Liniger, warranting its own story told.

Cushing's interviews included several British writers and collectors (in addition to Paul Oliver) who provide a perspective on blues scholarship in England shortly before rock and roll and the British invasion. They included John Broven, Robert M.W. Dixon, Mike Rowe and Chris Barber. The British, more than anyone, reintroduced the United States to its own music, surmounting the American racism that vilified African-American music and culture and installing this music and culture to its rightful place on a world stage.

Instructional and authoritative, Pioneers of the Blues Revival is also notable for who is not included in the interviews. Collector Stephen Calt died October 17, 2010 and would have been a great interview and balance for Dick Waterman, who called him out on his book about Skip James, I'd Rather Be the Devil (Chicago Review Press, 2008). Calt also coauthored with Gayle Dean Wardlow the biography of Charlie Patton King of the Delta Blues Singers: the Live and Music of Charlie Patton (Rock Chapel Press, 1988). His death was a grave loss to this community.

The two most glaring blues authorities, Robert "Mack" McCormick and Steve LaVere, are effectively missing in action. At the heart of their intertwined story lies the truth and pathos of Robert Johnson. When it is all said and done, the story of the research into Johnson's life, the litigation, the exploitation, and professional in-fighting surrounding the phantom blues singer will turn out to be more interesting than the Johnson's life was. But, that ship has sailed.