BY GLENN ASTARITA
August 9, 2014
Sign in to view read count 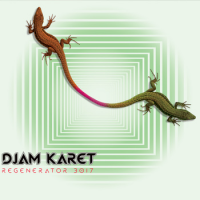 The Southern California progressive rock band commemorates 30-years as a high-flying and highly esteemed unit with its 17th full-length album that to some extent rewinds back to the infancy of the genre. And while the group frequently enjoys critical success and a loyal fan base, the musicians openly recognize that commercial success is not the main driver, as they predominately focuses on the artistic side of matters. They don't tour a whole lot, yet their steadfast ability to zoom in on qualitative aspects, often elevate the totality of their output to higher ground via a manifesto, saliently nurtured with a sense of purpose. At times, Regenerator 3017 is operated with a dash of antiquity, partly due to multi-instrumentalist Gayle Ellett's use of the Mellotron keyboard, hearkening back to the early days of King Crimson, The Moody Blues and numerous cutting-edge Euro-prog bands of the 70s.

The big bass and pulsating cadences remain intact, but unlike older Djam Karet outings, this album is not designed with a search and destroy mantra, ablaze with streaming guitars and thrusting crescendos. However, even in these instances, the band always brings a keenly melodic gait to the table and not primarily concerned with endless riffing and tricky time signatures just for the sake of it.

Guitarists Mike Henderson and Mike Murray intermittently juice the proceedings up atop slow grooves and climactic buildups, although "Wind Pillow" morphs into a stately rock-anthem of sorts amid Ellett's silvery synth lines that etch the primary hook. Moreover, echoes of "Dark Side of the Moon" era Pink Floyd come to mind. As the following piece "Lost Dreams" is steeped in a hard-rocking blues vamp and smoothed with ambient sub-motifs.

The final track "On the Edge of the Moon," kicks off with sublime acoustic pianos and accenting electronics effects that swirl into a symphonic rock opus, leading to a circular ostinato breakout. At eight and one-half minutes it's the lengthiest work. Here, Ellett's corpulent Moog notes contrast the steamy guitar parts, bleached with a soulful edge that segues into grandiose choruses towards the finale. Ultimately, they redevelop a classic framework into a bracing philosophy, largely spiked with an effervescent modern era discourse.

Prince of the Inland Empire; Living in the Future Past; Desert Varnish; Wind Pillow; Lost Dreams; Empty House; On the Edge of the Moon.