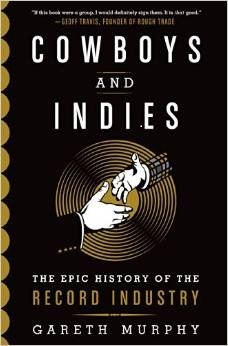 "Revelations: I suppose you've come to see the future? If you wish to believe today's self-proclaimed experts, imagine a system of mobile devices through which music flows as a kind of utility, financed by a subscription similar to public television in Europe. Tomorrow's listeners will, they say, consume music like water..."

Songs stored and played as computer files effectively antiqued music for delivery as discreet bundles of entertainment even more fundamental than 78-or 45-rpm "singles." In this state, the 50-year old paradigm of the long-playing album as the vehicle for presenting a thematic collection of songs is shattered and music finally evolves completely into a disposable commodity "consumed like water. Gone is the Lester Bangs ritual of shopping for music with the element delayed gratification, pouring over liner notes and savoring the experience even before the platter is out of the shrink wrap. Now, a single song may be summoned magically from the ether, consumed and then just as mysteriously disposed of... or not.

Gareth Murphy' Cowboys and Indies: The Epic History of the Record Industry serves as a grand, "and now for the rest of the story" when grouped with the recent scholarship of Marybeth Hamilton's In Search of the Blues (Basic Books, 2010), Daniel Beumont's Preachin' the Blues—The Life and Times of Son House (Oxford University Press, 2011), Larry Birnbaum's Before Elvis—The Prehistory of Rock 'n' Roll (Scarecrow Press, 2013), Amanda Petrusich's Do Not Sell At Any Price: The Wild, Obsessive Hunt For The World's Rarest 78 Rpm Records (Scribner, 2014) and Steve Cushing's Pioneers of the Blues Revival (University of Illinois Press, 2014).

This recent flood of rock and blues scholarship has been the necessary response to scriptural account of rock music's formation hardened into myth over the past 50 years of music writing. Revisionist history? No, it is history viewed and listened to with a cooler head. Murphy takes the opportunity in this newly minted revival of music writing to detail the recording industry, without which none of these other books would have ever been written. It is as a central story to civilization as if faith and history. Music permeates and is permeable. It lives in everything. Murphy tells the story of how this cultural power was harnessed and how it made a great deal of money as well as its evolution into the atomized state it exists today.

The history described herein is of a business, yes, a business, one intended to make money. The music was incidental. But, when Mamie Smith recorded "Crazy Blues" which went on to sell a million copies among the marginalized African-American population, recorded music proved its rainmaking capacity right out of the chute. Murphy's narrative is much longer on the "Cowboys" than the "Indies" marring his history, rendering it incomplete. Murphy deals well with the major labels and players while essentially ignoring the smaller local labels like Jackson, Mississippi's Trumpet records and Memphis' Stax. Rather than being definitive, Cowboys and Indies: The Epic History of the Record Industry exists as a good start for further, more complete scholarship surrounding an entertainment game-changer.