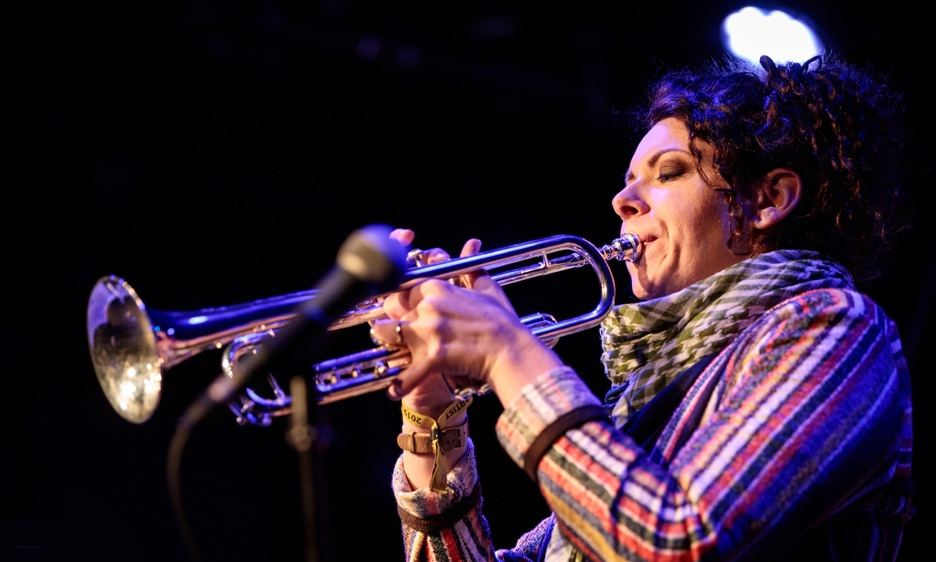 The intuitive side is where a lot of my music lives. That's where I feel alive. I feel so lucky to be on stage and making this intuitive music with people. What could be more important?
—Stephanie Richards

Calgary's Stephanie Richards has been rubbing shoulders with some of the world's finest jazz players since putting down roots in New York City. The trumpeter has a passion for testing boundaries and an intuitive approach to her work. Her latest, Take the Neon Lights, is a tribute to her new home.

All About Jazz: Collaborations have played a big part in your career to date. Is that by design?

Steph Richards: It's inherent in the music that we play. We can't create this music alone; it's all collaborative. But there are a few mentors and people that I've worked with that have taught me a lot about the power of the collective.

There's a hyper-intelligence that can come from mining the individual talents of multiple people and bringing them together. The whole is greater than the sum of its parts.

AAJ: You've been with some of the greats: Anthony Braxton, John Zorn. Are these people you've sought out?

SR: Like so many things in life, these connections just seem to happen. Like attracts like in some sort of way. I'm playing with certain people in the community and somebody likes my sound, and then I play more with them. It's just kind of ends up that I'm working with Braxton or Henry Threadgill or someone like that.

It's also part of living in New York City. This is coming from someone who is so proudly Canadian, I loved growing up in Calgary and I loved living in Montreal. I identify with so much Canadian culture. But I moved to New York City for music.

When you're in these spaces where it's so densely packed with so many ideas and so much talent, you have a chance to encounter some of the greats. People are right there. You end up running into Henry at a club or something like that.

AAJ: Your music is often difficult to categorize. Presumably that comes out of the same kind of dense environment you're describing.

SR: Yes. The categorization thing is so hard for so many artists because we're all being influenced by so many genres of music. I grew up in a Scottish pipe and drum band. So how did that get me to where I am now? As an artist, it's hard to label your music. I'm more comfortable letting other people who are listening to it—people like you who do that work, who try to articulate what you're hearing. I'm more comfortable letting other people categorize the music so that I don't have to put myself in that box when I'm trying to compose.

AAJ: So it's not a conscious effort. You're not looking purposely to work outside of jazz norms for example.

SR: What I am very consciously trying to do is push this idea that jazz should have a norm to begin with. I believe in the history of this music. I believe in the intention and impetus and all that jazz was built on. But I also believe that it's a sound in evolution, that it is the sound of the world, the sound of the people that are playing it, in that room on that day. I guess it is a conscious effort to push those jazz norms, but I'm not necessarily trying to make myself not fit in any category. I would proudly believe that I'm trying to play the essence of what jazz is, in my own way of course.

AAJ: How do you feel about labels like avant-garde or experimental?

SR: They all have their own vibe, their own aesthetic and history. Experimentalism to me—I'm thinking of John Cage for example— I definitely identify with what it means. Avant-garde has its own weight to it.

There's a new term that's been floating around that I really love. Wadada Leo Smith would talk about this. I worked with him when I was at CalArts. He wanted to call this music "creative music." That's something that seems to fit pretty well right now. Something that we're all together trying to make is something that's creative.

AAJ: It's a much more approachable term. It's less esoteric or elitist.

SR: I'm so glad you said that. The idea of elitism, in bebop that idea was embraced. Musicians were trying to give credit to the massive amount of virtuosity that this music had inside of it. But now we're in a place—at least for me, speaking as someone who studied classical music and I still play a lot of contemporary new music—it's important to me that this music that I make, I try to peel away those feelings of elitism. That goes for the venues that I prefer to play also.

Again, it's music that's for the people. I'm not trying to mask anything behind complexity in my music. If there's complexity there, it's reflective of what I'm hearing in that moment. But I'm not trying to distance anybody. There isn't some secret formula that they need to understand. There's no secret message in there. I'm just making music that I want your body to have an emotional feeling about. It's as simple as that. I hope that it moves you, and I hope that it makes you curious or makes you angry or something.

AAJ: Yet your work is detailed, often dense and complex. Do those things strike you as contrasting?

SR: No, actually. If we have multiple players playing multiple layers of information—maybe their chord changes aren't lining up or they're playing in different metres or something—there's more of a macro influence that we can feel from something that is dense and complex. I really enjoy that. There's a lot of velocity inside a really complex sound. I like the idea that we can kind of let this wash over us.

AAJ: It's reflective of the times we live in.

SR: Absolutely. It's also a push back against this feeling that with technology, we're being pushed to think in a very analytical kind of way right now. We're eliminating the fact that our bodies have this massive intelligence inside of them. We encounter people with our bodies, it's not just through zeros and ones, texting and email. There is so much information that we can feel from being together, sitting together in a room listening to music or talking to one another. As a musician, I hear a lot with my skin and with my body.

So instead of making music that is easy to categorize, to make the chord changes fit here and the metre fit here, I'm trying to push against that and blur that space where we can't necessarily articulate what's happening. Maybe there's more of a feeling behind these dense levels of complexity that our bodies can enjoy.

AAJ: It's one of the big ideas of our time. The tension between data and analytics relative to intuition.

SR: We aren't even aware how much these forces are pushing us. I love so much about the way technology is evolving, I'm hoping it will save us actually. But I completely agree with what you're saying. The intuitive side is where a lot of my music lives. That's where I feel alive. I feel so lucky to be on stage and making this intuitive music with people. What could be more important?

AAJ: How does Take the Neon Lights fit into all of that?

SR: Without being too literal, the idea behind that record was to capture my encounters living in New York City. The music isn't about a particular street or a particular moment in time. It's more about the feeling behind a place in New York, or the feeling behind three years of hyperintensity, of a particularly strong time in my life. How space influences how we think and how we feel and how we play, which is why I moved to New York to begin with.

This record was trying to explore that idea of what does New York City sound like to me? What does it feel like? When I was structuring the compositions, I had to push against being too literal about it. What helped was finding poetry that was also about New York but that captured an essence behind a moment in New York or a place. It wasn't too literal. I think every title on that record came from a particular poem that was also about New York.

SR: I want to release a record that explores how space can influence what we play. So I got together with the scent artist Sean Raspet, someone who designs smells. I thought, what if a scent could be one part of a musical composition? It could be one of the controlling structures that musicians are improvising and responding to. Part of the equation is that they have to open a box, smell something and allow that to influence their musical choice. So it's a scratch-and-sniff record.

I was so lucky because I had amazing musicians in the studio who were so game. It was Jason Moran playing piano, Kenny Wollesen on percussion (he brought all these amazing instruments that he built and designed) and Stomu Takeishi on bass. Three people I absolutely love and admire so much. And they were totally down to try out this completely wacko idea.

But while it's kitschy and fun, at the same time there is a genuine curiosity behind the project. A lot of times we can't articulate what a song is about. We try to describe it. But you know, you have a song about loss, and well, what does that sound like? Scent is really similar to music in that it's its own language. There's actually no codified way of explaining what a smell is. So we have all these descriptors and metaphors to try to explain how it makes us feel.

I'm excited about the project, it's going to come out next year. We're going to play it live, with scents. And because you can't sell a smell on iTunes, there will be a chance for people to engage with a record. They'll have their own physical experience with the music, if they can buy the record. That's something I'm really excited and curious about. 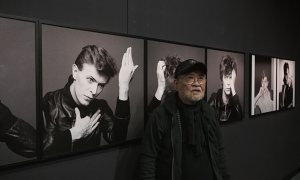