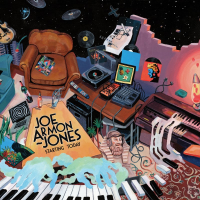 Something exceptional is happening in London in spring 2018. A succession of albums, recorded by an intimately connected community of around 60 young musicians, is taking jazz in ear-opening new directions. Hybridisation and genretic modification are the names of the game, but the scene also reaffirms the music's traditional building-blocks, among them the creativity of black musicians in Britain, North America, the Caribbean and Africa. Nothing quite like this has happened in Britain for around 30 years. Not on this scale anyway. First out of the traps was We Out Here (Brownswood Recordings), featuring around 35 members of the new community in various guises: Maisha, Ezra Collective, Triforce, Kokoroko and line-ups led by drummer Moses Boyd, tuba player Theon Cross, saxophonists Nubya Garcia and Shabaka Hutchings and keyboardist Joe Armon-Jones. Hard on its heels was Your Queen Is A Reptile (Impulse!) by Hutchings's Sons Of Kemet and Loveplaydance: 8 Scenes From The Floor (Brownswood) by Toshio Matsuura Group. All three albums have already been reviewed here. And there are more releases in the pipeline, the most immediate being keyboardist and Brownswood alumnus Kamaal Williams's The Return (Black Focus Records), and Garcia's self-released EP When We Are, made with a band drawn from the We Out Here community including Armon-Jones. Meanwhile, here comes Armon-Jones's own-name debut, Starting Today. A 100% proof blend of jazz, fusion, hip hop and dub, the album showcases Armon-Jones's breathtaking sonic-wizardry. It also reveals him to be a composer of note. His lyrics are perhaps a tad perfunctory, but no matter—he writes great tunes and interesting arrangements. And he brings a seemingly inexhaustible bag of timbral tricks to the Wurlitzer. The band, drawn in the main from the We Out Here family, is top ranking, too, with a killer rhythm section and strong frontline-contributions from Garcia and trumpeter Dylan Jones. Armon-Jones is the main solo voice, however. Brownswood, the label formed by London club DJ and BBC Radio 6 Music broadcaster Gilles Peterson in 2006, figures large in this spring 2018 musical high-tide. Peterson's previous label, the jazz dance and acid jazz-centric Talkin' Loud, defined one corner of the London jazz world in the 1990s. Brownswood is doing something similar right now. It is the sort of outfit that gives monopolies a good name.