By C. Michael Bailey
February 8, 2016
Sign in to view read count
The musical specter of John Coltrane is so massive and dense that its creative gravity often does not allow even a whiff of his contemporary saxophone players. While certainly acknowledged as an innovator in his own right, saxophonist Stan Getz rarely gets the attention he deserves as often as many of his contemporaries. That is what makes the magic in these two previously unissued releases from Resonance Records. Getz reminds us here what a commanding presence in jazz he was both as a saxophonist and as a genre stylist. 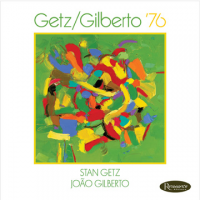 In the 1960s, Stan Getz recorded five albums drawing on the music of Brazil, deftly named Bossa Nova. These recordings included: Jazz Samba (Verve, 1962), Big Band Bossa Nova (Verve, 1962), Jazz Samba Encore! (Verve, 1963), Getz/Gilberto (Verve, 1964), and Stan Getz with Guest Artist Laurindo Almeida (Verve, 1966). Getz/Gilberto won six Grammy Awards, including Album of the Year. Getz/Gilberto #2 (Verve 1966) followed, but fell short of the chronology of releases. To be sure, Getz got more mileage out of what author James Gavin called, "the billowy, ice-blue satin of Getz's tenor [that was] bossa itself." But it was not to last forever. The Getz-Gilberto phenomenon would only be shooting stars between 1964 and the dawn of the '80s.

In May 1975, Getz and Gilberto recorded The Best of Two Worlds (Columbia) and a year later, appeared at San Francisco's famous Keystone Korner, a performance captured on the present Getz/Gilberto '76. Gilberto was an intensely shy man who did not like performing. Coaxed by Getz to perform, Gilberto spun through 13 selections of magic with Getz occasionally offering a solo chorus. Gilberto's voice is the star: vibratoless and almost a whisper and a minimalist guitar style, Gilberto took a genre gestating in the '50s into full bloom a decade later. Gilberto was first and foremost a stylist. He championed the music of Alcivanando Luz and Carlos Coqueijo Costa ("E Preiso Perdoar") and Antonio Carlos Jobim ("Aguas de Marco," "Cega De Saudade"). This is humid and mesmerizing music, all brought together in this quiet lightning strike, graced one spring week in 1976. 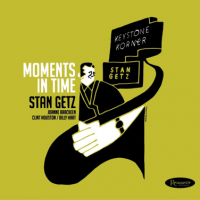 In the shadow of the Getz/Gilberto '76 are Getz' performances the same week, without Gilberto. However, these performances cast a shadow of their own. Getz turns in a characteristically muscular performance that should help any Getz newcomers to know what the fuss was all about. The disc begins with a lengthy reading of the Warren/Dubin "Summer Night." Getz sounds as the logical evolutionary artifact of Lester Young. Getz adds a fire to that smooth vibratoless sound, making it pop like a firecracker. Gets is joined by pianist JoAnne Brackeen, bassist Clint Houston and drummer Billy Hart who all also accompanied Joao Gilberto on Getz/Gilberto '76. On both recordings, the rhythm section is well captured to the credit of Fran Gala, who restored the sound and mastered the recordings.

Getz's repertoire effortlessly spans bebop, modal, cool and post-bop jazz, all of which he fully mastered. Getz demonstrates this mastery on the triptych of Horace Silver's "Peace," Dizzy Gillespie's "Con Alma" (a 12-minute tour-de-force), and a shimmering statement on Ellington's "Prelude to a Kiss." His tone may be how I would define the tenor saxophone sound. In any event, Resonance Records has again provided the jazz community valuable additions to the available discographies of prominent jazz artists. These are two exceptional finds.