BY PAUL NASER
February 8, 2016
Sign in to view read count 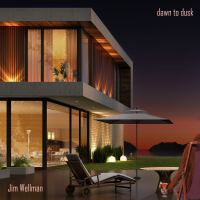 Jim Wellman, multi-instrumentalist and co-founding member of acid jazz outfit the Brand New Heavies, was all but done working in music when the idea for his latest release, Dawn to Dusk, gripped him and wouldn't let him go. According to him, after witnessing certain world events, in particular events in Ukraine, he "felt he had to do something to express his dissent." What he ended up with is a very accessible, genre crossing album that, in his words, "is social commentary, but viewed through perspectives of human psychological evolution, and analysis of mass communication and propaganda."

Taking musical cues from disco, smooth jazz, and many kinds of rock, Dawn to Dusk brings to mind Earth, Wind & Fire, Steely Dan and, though with significantly less energy, Snarky Puppy. The arrangements and melodies are compelling, but as Wellman himself played and produced everything but some of the vocals, the performances lack the intensity and tightness of the aforementioned bands.

Wellman's playing undoubtedly deserves kudos though; his funky guitar comping and solo on the opener "Lucy" give the track character and help bring it to a satisfying climax. His percussion work adds a subtle yet very evocative element to many tracks and evidences his rhythmic concept. "Night of the Meme" begins and is based of an interesting 6/8 figure that underlies the song's interesting harmonic shifts. Wellman is obviously a skilled producer, as well. On tracks like, "Premature Truth," he makes effective use of multiple instrumental tracks to create a lush stereo image, and when he inserts spoken word segments they take center stage yet don't bury the musical accompaniment.

While the lyrics, which cover many heady themes and, despite their sophistication, never really feel un-singable or contrived, could be a subject of a review and discussion in and of themselves, the music both serves the function of setting up the themes and keeping the listeners attention, which is no easy task. Fans of smooth jazz and R&B will thoroughly enjoy Wellman's latest, especially if they are fans of political commentary.