BY KARL ACKERMANN
September 24, 2014
Sign in to view read count 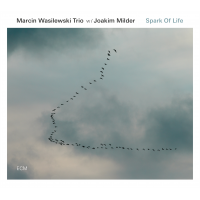 At about the same time Louis Armstrong was "inventing" modern improvised jazz—Poland was already immersed in a jazz tradition that included American influences and an ethnic take on swing. Despite bouts with repressive regimes that sent jazz underground, Poland continued to be a progressive haven for the form. Through the 1950s and 1960s pianist/composer Krzysztof Komeda developed a unique and influential European style of music with free jazz elements. Particularly influenced by Komeda was trumpeter Tomasz Stanko who worked extensively with him before fronting his own quintet and making his own indelible imprint on jazz. Both artists left their mark on the Marcin Wasilewski Trio bringing a symmetrical element to the chronology of these musical relationships.

In the mid-1990s pianist Wasilewski, bassist Slawomir Kurkiewicz and drummer Michal Miskiewicz—known then as the Simple Acoustic Trio—began touring in support of Stanko, finally joining him to record Soul of Things (ECM, 2002). ECM founder Manfred Eicher's ear for talent, led to Wasilewski's now namesake trio recording their debut Trio (2004) and their subsequent collections January and Faithful (ECM, 2008 & 2010). Spark of Life, takes them to the next step in their patient evolution. The trio is joined on a number of tracks by Swedish saxophonist Joakim Milder, who had also played with Stanko on his Komeda tribute, Litania (ECM, 1997).

Among his musical inspirations, Wasilewski has cited pianist Keith Jarrett and that demonstrates itself on the beautiful opening trio piece "Austin" with its touch of gospel. "Sudovian Dance" introduces Milder whose deep rich tenor casts the trio in a supporting role and their creative inventiveness balances the piece nicely. The title track (one version with Milder) and its variation (by the trio) is one of the most melodic pieces Wasilewski has written to date. Reimagined pieces such as "Do rycerzy, do szlachty, do mieszczan" from a popular Polish rock group Hey, and an almost unrecognizable "Message in a Bottle" reinforce Wasilewski's growing reputation as a visionary improviser. Komeda's presence is here as well in fresh interpretation of "Sleep Safe and Warm." Herbie Hancock's fusion piece "Actual Proof" is given an acoustic treatment and a bit more swing than the original. Milder's sole writing contribution "Still" allows the saxophonist and Wasilewski to trade off intricate leads on the fast-paced tune.

The patient pace of four releases in the past ten years from Wasilewski, Kurkiewicz and Miskiewicz is symptomatic of the intellectually creative approach the group has applied to their music. Wasilewski's style—while plainly unique—can easily impart influences as diverse as pianists Bill Evans and Esbjorn Svensson. The latter is evident in less confining live performances where studio restraints give way to some genuinely uninhibited grooves. Milder—who plays on five of eleven tracks—brings some high points to Spark of Life, particularly in his soulful performance on "Sudovian Dance." The saxophonist begins touring with the trio this fall.

When Stanko began his association with Wasilewski's trio, they were teenagers and so, they have a long and promising future. Their evolution has seen them go from a mostly minimalist approach to an increasingly open and impressionistic style but not entirely at the expense of the stillness in which they express so much. Spark of Life is a fine collection with distinctly different imprints and like each previous Wasilewski release, it concludes with the anticipation of even better things to come.