Maximize your visibility at All About Jazz by upgrading your musician page from standard to premium. With it, you'll receive All About Jazz home page exposure, a highly stylized / ad-free musician page with bonus features and benefits, an ad, plus you control where you sell your music and so much more.
Learn More
219 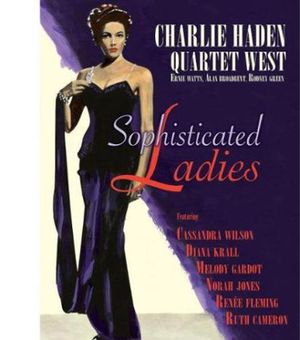 Gorgeous, poised and inviting. And that's just the sister on the cover of bassist Charlie Haden's latest with-singers-and-strings album. It's a retro design which, like the disc it packages, was inspired by Capitol Records' distinctive jazz-inflected vocal albums of the early 1960s. Your parents got off on this stuff big time back in the day, while you were busy listening to singer Bob Dylan and saxophonist Ornette Coleman and preparing for a little therapeutic rioting. But time passes and age mellows and even radicals such as Haden, in 1960 a member of the Coleman quartet which recorded the iconoclastic The Shape Of Jazz To Come (Atlantic), may eventually embrace the appeal of well-crafted songs of romance, sumptuous orchestrations and glamorous singers.

Of the Haden-led Quartet West's various albums in this preservationist, as opposed to revisionist, style, The Art Of The Song (Verve, 1999), made with singers Bill Henderson and Shirley Horn, is widely considered the best. Sophisticated Ladies is every bit as good. This time out the singers are, in alphabetical order of first names (as the liner notes carefully put it), Cassandra Wilson, Diana Krall, Melody Gardot, Norah Jones, Renee Fleming and Ruth Cameron, who with her husband, Haden, is also co-producer. Tenor saxophonist Ernie Watts and pianist Alan Broadbent are present once more, but drummer Larance Marable has been succeeded, following illness, by Rodney Green.

The 12-track album is split equally between vocal and instrumental tracks, with all bar one of the vocal tracks, Jones' "Ill Wind," featuring a string orchestra arranged and conducted by Broadbent. Vocals and instrumentals are sequenced alternately, and the disc kicks off with Gardot's "If I'm Lucky." Some of the vocal material is familiar; most of it, though written by masters such as Harold Arlen/Ted Koehler, Edgar De Lange/Josef Myrow and Johnny Mercer, is less so.

On the six instrumentals, unfussily arranged by Haden, Quartet West maintain the ambiance, with concise solos from Watts, Broadbent and Green. Hank Jones' "Angel Face," included as a tribute to the late pianist, is an atmospheric slice of noir, and Bennie Harris' "Wahoo" a frisky bopper. Duke Ellington's "Sophisticated Lady," which alone of the instrumentals also includes Broadbent's velvety strings, is as bewitching as the cover shot.

If I'm Lucky; Sophisticated Lady; Ill Wind; Today I Am A Man; My Love And I; Theme From Markham; Let's Call It A Day; Angel Face; A Love Like This; My Old Flame; Goodbye; Wahoo.