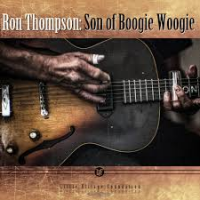 The Little Village Foundation is a non-profit record label started up under the direction of keyboardist Jim Pugh, who recently retired after twenty-five years with Robert Cray. The mission of this organization is to seek and record obscure yet prodigious musicians who have not received proper recognition and respect. Oakland guitarist Ron Thompson certainly falls into this category, and Son of Boogie Woogie hopes to give him nudge into the much deserved spotlight.

Ron Thompson is the rare guitarist who never strayed from his blues leanings. In an era where dime a dozen rock guitarists attempt to interpret pale imitations of the blues, Thompson is the real deal. The years spent accompanying John Lee Hooker and other top blues artists, instilled in him a driving awareness of how this music should, and has to be played.

Since his debut recording in 1983 "Treat Her Like Gold," Thompson has released six other records with his band The Resistors, the most recent being "Resonator," done in 2007 on the 32-20 label. He has enjoyed constant appreciation on his home turf in the San Francisco Bay Area, but anything vaguely resembling fame and fortune has regrettably eluded him.

This time around Thompson demonstrates he is adept at shuffling blues as the opener "Want Ad Blues," and "Too Late Brother," and can get down and dirty with "Telephone Blues." These are reminiscent of the classic West Coast style of T-Bone Walker, who is an obvious influence. But where he really shows his stuff is on the slide guitar numbers "Broke and Hungry," and "Show Biz Blues." He can expertly pull off riffs from the tough Chicago school, as well as flat out Texas boogie, all while belting out raw and raucous vocals. The final cut is a down home take on the perennial "Frankie and Johnny," which brings to mind the great Jimmy Reed, complete with harmonica and barroom swagger.

Though most of the authentic bluesmen who originated this uniquely African-American music have passed, Ron Thompson continues not only to play in the time honored tradition, but to live the life he sings about. He just might be one of the few left standing who play blues from the heart.