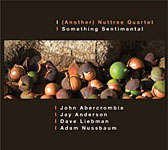 It's always a pleasure to hear a group of musicians who, over the years, have developed not just a strong musical bond, but a personal one as well. If it's a truth that most musicians' style is a direct extension of their personality—of who they are—then it's equally logical to extrapolate that the musical interaction between them somehow mirrors the way their friendships have evolved.

First coming together for a party to honor the recently departed mother of their longtime friend, drummer Adam Nussbaum—figurative leader of the collaborative Nuttree Quartet responsible for 2008's aptly titled Standards (Kind of Blue)—it's no real surprise that guitarist John Abercrombie, saxophonist Dave Liebman and Jay Anderson felt so comfortable playing together that a subsequent trip to the bassist's studio seemed like a great idea.

It was. With Abercrombie the only one back from Standards, however, it's equally unsurprising that, for Something Sentimental, Nussbaum decided to call this group (Another) Nuttree Quartet. This is a quartet with a shared résumé that reads like a history of jazz over the past 40 years, with a veritable who's who of luminaries including Miles Davis, Elvin Jones, McCoy Tyner and Paul Bley, but for Something Sentimental there was little preplanning; just four friends coming together for a program of eight well-known standards that each of them has likely played more times than they can count. With nothing to prove and no agenda beyond making some good music, it counters any suggestion that mainstream jazz is threatened by either extinction or irrelevance.

From the first moments of the quartet's Latin-tinged take on the classic "Poinciana," there's an unassuming, honest vibe that's immediately engaging, instantly compelling. Filled with comfortable interplay and fine soloing, and imbued—despite its eminent accessibility—with an adventurous sense of risk-taking, this is straight-ahead jazz the way it's meant to be played. The saxophonist focuses exclusively on soprano for the entire set with the exception of the enduring "Besame Mucho" where, with his wooden flute intro supported by Nussbaum's hands rather than sticks, Liebman's pan-cultural proclivities are seamlessly melded into a tune that ultimately turns to mid-tempo swing, bolstered by Nussbaum and Anderson's in-the-pocket groove.

The bassist takes the lead on an unexpected version of the song made famous by singer Billie Holiday, "Lover Man," supported by Abercrombie's elegant voicings. Since Abercrombie gave up his pick in the mid-1990s, regardless of his electric guitar's tone it feels more inherently organic. Still, he solos with tart plangency on the Latin-esque "It's Alright With Me," the disc's fieriest tune, providing sharp, incisive accompaniment for Liebman's most extroverted yet still thematically reverent solo of the set.

As good an album as Standards was—and it was very good—it lacked all the inherent benefits of longstanding relationship. With Something Sentimental, (Another) Nuttree Quartet makes the strongest case possible for the value of friendship, the unequivocal link between personality and performance, and the enduring value of The Great American Songbook.

Poinciana; I Hear a Rhapsody; Love Man; Besame Mucho; All of Me; All the Things You Are; It's Alright With Me; The Party's Over.