Some small steps for jazz 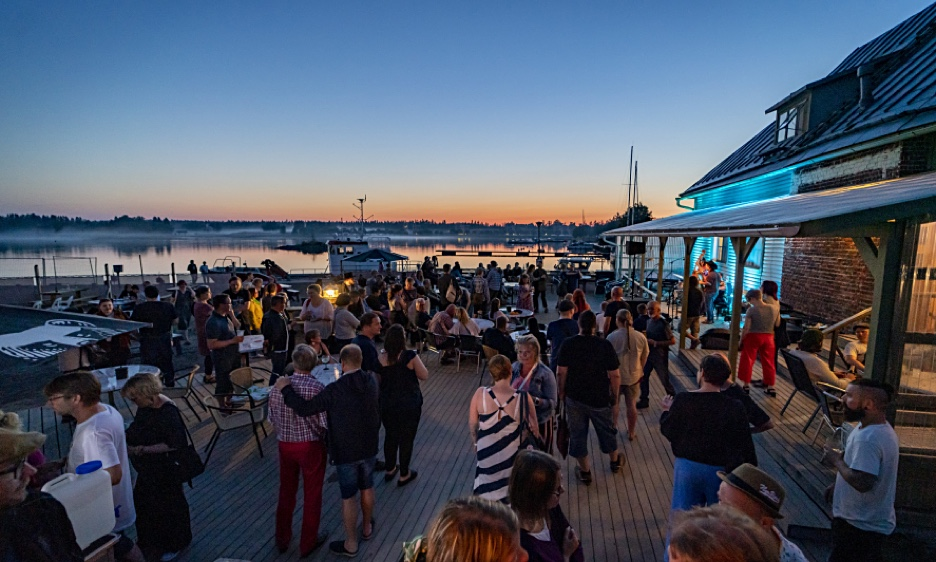 By Anthony Shaw
August 4, 2019
Sign in to view read count

A taste of true local Finnishness in combination with high art.

Raahe is a small town on the north west coast of Finland renowned if anything for the antiquity of its planning, much of which survives despite a fire in 1810 and an attack by the British navy in 1855 when the country was part of the Russian empire. Moreover, in an age of ever growing commercialism in music Raahe has for 31 years boasted a jazz festival that continues to mix cutting edge with more comfy entertainment, keeping the townsfolk as well as visiting cognoscenti suitably entertained.

A new type of festival The original concept was initiated by local teacher Pertti Kinnunen, who readily admits that he was actually asked by the town's cultural authorities to start a festival. Initially he was able to feature names such as Archie Shepp, Charlie Haden and Cecil Taylor, though in recent years the budget tightening has led the current director, domiciled Frenchman Charles Gil, to place greater emphasis on Finnish bands. But, in contrast to the format of old, the festival has also evolved a more hands-on approach, with not only local professionals but also community bands taking the stage.

Just one such was the 10-strong guitar-wielding Raahe United, an assortment of amateurs who, in the relentless heat of Europe's hottest heat-wave to date, opened the official program playing covers of contemporary Finnish and foreign evergreens. Following them in downtown Härkätori Square came another semiprofessional group, a quartet of skillful young musicians, Riga Rado. Jaana Ilkko on vocals an Gabriel Korhonen on trumpet led the band and the enthusiastic local audience through a varied selection of popular jazz standards, while around the square rugs were spread, toddlers played and toes were tapped; the festival was off to a dazzling start.

The crowd in the square have seen a lot of music over the years. Over the three days, eight different venues were on offer around town and in the locality (including a second library and a nearby island), where Gil assembled a roster that in addition to the local amateurs included some of the rawest young professional Finnish talent on the scene. And maybe the rawest were playing in the most genteel of these locations: hard blown, intense Coltrane-style bebop from Tampere, the Hot Heros, performing in the back garden of the elegant Lang House Tearooms.

The most prominent band on the bill, with three gigs and a workshop, was the recently recorded trio Sole Azul. Tapping into the Finnish love affair with the Argentinian styled tango, Sole Azul describe their music as a post-apocalyptic version. With two members coming from other successful contemporary Finnish bands (bassist Eero Tikkanen from Mopo and saxophonist Pauli Lyytinen from Elifantree) they give a very modern twist to accordionist Harri Kuusijärvi's edgy compositions, matching extreme improvisation and solo techniques to more traditional structures and rhythms. At two gigs the mighty baritone voice of Laplander Jaakko Laitinen, singing his own lyrics to the tunes he composed with Kuusijärvi, added a further contemporary element, with songs like "Alaovella" and "On Haaveet Haaveita" bringing Laitinen to the verge of tears, telling of the angst and frustrations of modern life.

Contemporary composers were presented each night, in a range of styles from traditional saxophone or piano based trio, to the absolute avant-garde. The second night on the 'main stage,' situated just behind a former customs building right in the middle of the recreational harbor, featured three young Finnish bands with a more traditional approach, but a similar standard of skill. Most adventurous of these were MINE, a piano based quartet centered around the singing and vocalizations of Seima Savolainen. Carla Bley instantly came to mind on hearing this show.

On the last night it was the turn of foreign artists to present the cutting edge of contemporary music. In the afternoon the poetry and sound trio Three Days of Forest linked up with local choir Raahe Laulu, performing the poems of Americans Rita Dove and Gwendolyn Brooks, with their vocal acrobatics, song, and synthesized viola and drums making for a powerful and eerily moving mix. The same night, the festival headliners were also from Paris, bringing to the 'main stage' the sounds and sentiments also from the Middle East in the form of Syrian-born Näissam Jalal's songs and flautism, entitled Quest of the Invisible. On their first performance in Finland, these seasoned artists helped wind up the whole program, before a final jam for the last late night dancers.

Raahe is not quite as distant as distant from Helsinki as the moon, though it is a 600 kilometer journey, but it is certainly light years from the cosmopolitan world of other major Finnish festivals. Most venues are within 10 minutes walk from the 'main stage,' and the working language is obviously Finnish. But the intimacy and intensity of performance can overcome this restriction, as with the depth of Laitinen's twisted lyrics, personified through the combination of his insistent voice with Sole Azul's lively interpretations. When Finnish musicianship is married with intense poetry it transcends any language barrier. And with this focus on intimacy, in the size of the town and the venues, and in the proximity between audience and musicians, Rantajatsit is just such a taste of true local Finnishness in combination with high art.