By Troy Dostert
August 4, 2019
Sign in to view read count 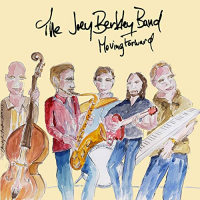 A saxophonist with a penchant for exploring multiple genres, Joey Berkley has a foundational love of straight-ahead jazz, as exemplified on his More n' Four (Self-released, 2009) and his work as director of the Westchester Center for Jazz and Contemporary Music in Yonkers. But his other projects allow him to explore his avid passions for R&B, funk and fusion, as these are also key ingredients in shaping his musical identity. On his latest outing, Moving Forward, Berkley brings all these components into the mix, and if the overall result can at times be unwieldy, Berkley and his bandmates bring a good deal of devotion and well-executed musicianship to the endeavor.

Berkley has made some nice personnel choices, utilizing the talents of pianist Gary Deinstadt, bassist Joris Teepe, drummer Chris Parker and guitarist Andy Abel, each of whom has played in one or another of Berkley's projects over the years. Abel's presence is especially significant given the pop and R&B influences that emerge throughout the album, as he's frequently at the center of the album's catchy grooves.

As for Berkley, his jazz chops are strong, as one hears loud and clear on "Moving Forward," the album's most enticing cut: a post-bop burner with energy to spare, Berkley's wide-ranging solo roams convincingly over the band's granite-solid rhythmic foundation. The bluesy "Dunce-Cap" is another winner, with a complex head that reveals the band's cohesion and provides some terrific solo opportunities for Abel, Berkley and Teepe, whose lyrical bass solo oozes charm.

Whether the more pop-oriented moments on the record are as successful will depend on the proclivities of the listener. Berkley's "Loss and Found" moves perilously close to smooth-jazz territory with a saccharine quality that is only partially offset by the track's more robust finish, catalyzed by Abel's assertive power-chords in transitioning to a vamp that gets the band a bit more riled-up. And the slow opening to "Good-Bye" suffers from a similar tendency to pour the syrup a bit thickly, although a sudden transition into an up-tempo section does enliven the track, and Berkley himself seems fully liberated once he can dig into the funky rhythmic groundwork laid down by Abel and Parker with one of his most dynamic solos on the album.

The one cover song, "Killing Me Softly," is given a R&B-flavored treatment that seems to encapsulate the album's challenges: while Berkley's statement of the tune is almost too sweet for its own good, other aspects of the arrangement are more interesting, hinting at what the band can offer when the music is less direct in its approach. Fortunately there's real meat on the bones in "3/4 of 4/4," a cleverly written piece that gives the band a chance to stretch its legs with some in-the-pocket, unalloyed jazz. It's really the best showcase for these musicians, who bring a lot to the table when they have the opportunity to do so.