Bill Evans with Eddie Gomez and Jack DeJohnette: Some Other Time: The Lost Session From the Black Forest 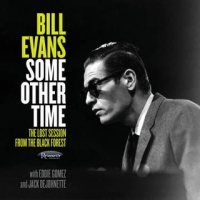 It plays out like a tale of espionage. In Bremen, Germany, more than five-thousand miles from his Los Angeles home, American producer Zev Feldman, has a chance meeting with the son of a late German jazz producer. In a parking lot, the German plays a single track of music on his car stereo; a forgotten recording from tapes almost fifty years old. Feldman, upon hearing more of the tapes, decides he needs to get this out to the world. It is not quite that straight-forward and it takes the better part of two years to complete the deal. The result is a rare Bill Evans studio album, Some Other Time: The Lost Session From the Black Forest.

The never before released album features Evans, bassist Eddie Gomez and drummer Jack DeJohnette and represents DeJohnette's only studio recording with Evans. The content is trademark Evans in style, with alternative versions of "You're Gonna Hear From Me" and duo (with Gomez) and trio versions of "Baubles, Bangles & Beads." The difference between this and Evans' better known trio is in the influence of a young DeJohnette who plays with a lightness on the snare that belies his ability to guide the direction of the music. In comparison, the Gomez/DeJohnette trio opens Evans to more consistent cadences and longer lines than what was typical of the Paul Motian/Scott LaFaro trio. The differences may be subtle, but they place Some Other Time in a light that provides a somewhat different perspective on Evans' creative evolution.

The animated "You Go To My Head" opens the first disc and sets the tone for a mostly upbeat collection of twenty-one compositions, relying deeply on well-known standards. There are, of course, the kind of ballads that were mainstays in the Evans repertoire. "Very Early," "I'll Remember April," "My Funny Valentine" and "Turn Out the Stars" stand out among the more reflective pieces. Another highlight is "Lover Man (Oh, Where Can You Be?)," demonstrating some of Evans' exceptional improvisational skills. Evans also offers some other fine solo performances with "These Foolish Things" and an unfinished "It's All Right With Me" being noteworthy.

Gomez worked with Evans for some time but DeJohnette, for only six months in 1968. It was, however, at a time when Evans was overflowing with novel ideas and establishing himself as a force for change in jazz. Moreover, Evans was on the cusp of moving away from swinging lyricism to becoming a musical beat-poet. DeJohnette's sense of interchange and his propulsive motion, and layering technique lent itself to the new direction that Evans was working toward, and that influence remained after the drummer's brief tenure with Evans. The two-CD set includes an informative forty-page booklet with previously unpublished photographs, essays and interviews and there is a limited edition hand-numbered two-LP set as well. Some Other Time: The Lost Session From the Black Forest is more than a nice-to-have addition to the Evans catalog; it is an excellent collection that shines a new light on one of the most revered artists in jazz.

Disc One: You Go To My Head; Very Early; What Kind of Fool Am I?; l Remember April; My Funny Valentine; Baubles, Bangles & Beads [duo]; Turn Out The Stars; It Could Happen To You; In A Sentimental Mood; These Foolish Things; Some Other Time. Disc Two: You’re Gonna Hear From Me; Walkin’ Up; Baubles, Bangles & Beads [trio]; It’s Alright With Me [Incomplete]; What Kind Of Fool Am I?; How About You; On Green Dolphin Street; Wonder Why; Lover Man (Oh, Where Can You Be?); You’re Gonna Hear From Me [Alternate Take].