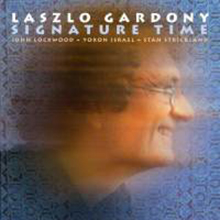 According to his liner notes, pianist Laszlo Gardony's Signature Time is "a tribute to all African-inspired sound." It's a tribute that recognizes the centrality of African music in so many contemporary genres, showing this recognition in the creation of some fine original music and the reworking of some classic songs.

Gardony was born in Hungary but has been resident in the USA for some years. He's a professor of piano at Berklee and has worked with Dave Holland, Randy Brecker and Miroslav Vitous, among others. The core trio of Gardony, bassist John Lockwood and drummer Yoron Israel has been together for almost a decade. Tenor saxophonist Stan Strickland, Gardony's old friend and collaborator, adds some tellingly effective horn playing as well as an evocative wordless vocal on "Spirit Dance."

The band is at its most upbeat on "Bourbon Street Boogie," a 20-bar blues that gives Strickland some space to blow, but it's the two most laidback tunes that show the musicians' talents off to best effect. "Silent Words" is a wonderfully gentle piece of music. The trio is controlled, concise, economical, yet manages to invest the seemingly simple and repetitive tune with great humanity and beauty. "Under The Sky" combines Gardony's piano with Israel's vibraharp to create another placid, reflective and beautiful tune.

Gardony also has an imaginative way with cover versions. Billy Strayhorn's "Johnny Come Lately" gets a bop-flavored treatment with Lockwood's solid pulse and Israel's swinging percussion giving Gardony and Strickland a strong center around which they create flowing and lyrical lines. Lennon and McCartney's "Lady Madonna" sounds rather unimaginative by comparison—in stark contrast to the band's reinterpretation of "Eleanor Rigby." Gardony keeps this song's melody at the center of his arrangement, but Lockwood and Gardony's bass line gives the tune a hypnotic and dark pulse while Israel's jagged, funky drumming could almost be classed as a second lead line. Sir George Shearing's "Lullaby Of Birdland" gets a similarly creative reworking—Lockwood's bass riff once again at the heart of the music as Gardony and Israel set up a slinky and relaxed groove.

Signature Time has style, imagination and beauty, both on Gardony's original compositions and on his imaginatively reworked versions of standards. The album enhances the reputation of every one of the musicians and re-affirms the talents of Gardony himself.