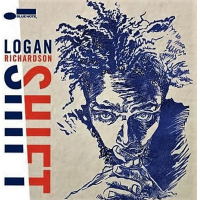 Shift is a welcome return to the emotive stylings of Logan Richardson, the Paris-based, Kansas City-born saxophonist and composer who garnered respect as a fluent voice with his 2007 debut Cerebral Flow (Fresh Sound) and projects with peers like pianist Gerald Clayton in NEXT Collective. With this debut on Blue Note the blending of culturally rich environments feed creative music realized by Richardson's dream band of jazz luminaries: guitarist Pat Metheny, pianist Jason Moran and a superb rhythm unit of bassist Harish Raghavan and drummer Nasheet Waits.

Some dream bands don't live up to expectations but this one does. Richardson's playing is a full of verve complimented by Metheny's deft technique and varied tonal processing. Moran brings his usual pianistic flair and doubles on keyboards while the music's core is held together nicely by the rhythm section's taut yet malleable timing. Though Richardson is clearly influenced by his metropolitan surroundings, his jazz and blues roots from Kansas City, Missouri are evident resulting in an organic amalgam that is not easily categorized yet equally fresh and approachable.

"Mind Free" and "Creeper" are thick with atmospherics and harmonies that open into roomy pockets for the musicians to fervently explore. In contrast, there's a unique reworking of pop singer Bruno Mars's hit "Locked Out Of Heaven" that is dark and moody. Other compelling pieces include the chamberesque "Slow" which rises to spectacular crescendo; the multiple changes in "Imagine" and the brightly lit groove called "Untitled" where Metheny does some serious shredding. An excellent release from the talented Logan Richardson.

Mind Free; Creeper; In Your Next Life; Locked Out Of Heaven; Slow; When I Wake (Interlude); Imagine; Alone; In Between; Time; Untitled.