By Chris Mosey
November 9, 2018
Sign in to view read count 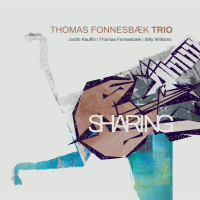 The title is apt and perhaps a trifle ironic. Danish bassist Thomas Fonnesbaek and the blind young American pianist Justin Kauflin share a condition known as synaesthesia, in which their senses overlap and they experience music as color.

For this, their second album together and recorded in Gothenburg, Sweden, they are joined on by Kauflin's childhood friend, drummer Billy Williams, who has worked with a number of first-class jazz musicians including Benny Golson, Ellis Marsalis and Christian McBride.

Williams kicks things off with some excellent cymbal work on the Fonnesbaek original, "Point Of No Return." Kauflin and Fonnesbaek then share the honors, Kauflin a trifle ragged at first, Fonnesbaek more self-assured. Things then even out, with Kauflin displaying considerable flare, especially in a slow passage just before the piece comes to an end.

Fonnesbaek shoulders the lion's share of the writing for the album. "First Dance," "For Paco" and the title song are all his. They are followed by a sensitive, gently swinging version of Irving Berlin's "The Best Thing For You Is Me," from the 1950 Broadway musical Call Me Madam.

"Tokyo Tower" is Fonnesbaek's tribute to one of the Japanese capital's most garish landmarks, a neon-lit copy of the Eiffel Tower. It's a jaunty little number, based on a simple but effective melody. Kauflin is particularly effective on this one.

The album closes with a version of McCoy Tyner's "Inception," from his 1962 Impulse! Records debut. The song revealed a lyrical side to the Tyner that wasn't always apparent in his later work with John Coltrane; here, Kauflin drives the number along at a roaring pace, with Fonnesbaek generally laying low, but with Williams coming to the fore with some fine playing.

An excellent album out of the modern mainstream, with Sharing, Kauflin repays the trust placed in him by his mentor, the late, ever-wonderful trumpeter, Clark Terry.

Point Of No Return; First Dance; For Paco; Sharing; The Best Thing For You Is Me; Navigation; Tokyo Tower; Improvisation; Connection; Inception.