By C. Michael Bailey
January 24, 2018
Sign in to view read count
If 2017 taught me anything, it was that my "Five Women" column would need to expand. So, this year, we will enlarge the format to "Seven Women" and be the better for it.

Anat Cohen's excellent Happy Song was released last year and expertly covered by All About Jazz's Geno Thackara in his review of the release. In his review Thakara shared an anecdotal exchange between Miles Davis and Gil Evans. This is an appropriate parallel with Cohen and composer/arranger Oded Lev-Ari, who is the second creative half of Happy Song. Not to be missed is the fact that Lev-Ari was arranging for a tentet, the largest band size Cohen could assemble short of a big band, and, not unlike what Davis had done with Evans with their famous nonet in 1949. Cohen and Lev-Ari have created a musical poly-glot tone poem where the music flows between traditional jazz, through klezmer, Easter European, Brazilian, Latin, Brazilian, and Americana in a single composition. This type of arranging is a dicey affair at best, but Lev-Ari weaves traditions together into a whole greater thanHappy Songs carries on the musical relationship between Cohen and Lev-Ari from their well-received Noir (Anzic, 2007). The results reflect a well-designed evolution into a sum much greater than its parts. 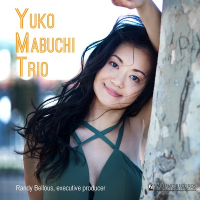 There is a major disconnect between how pianist Yuko Mabuchi looks on the cover of her self-named trio recording and how she plays on it. The youthful Ms. Mabuchi does not play with a youthful precociousness, rather, she plays with a confident command reflecting years beyond her age. Self-proclaimed idols of the pianist: Oscar Peterson, Herbie Hancock, and Monty Alexander are just the beginning of grace notes one hears in her playing. There are whispers of Gene Harris, Red Garland, Horace Silver and Wynton Kelly present in her playing. Mabuchi shows no fear in addressing standards like "What is this Thing Called Love" and "On Green Dolphin Street," or, even taking on the Strayhorn-Ellington juggernaut in a rollicking medley of "All the Things You Are," "Take the 'A' Train," and "Satin Doll." Mabuchi plays with an intelligent verbosity. She has much to say and many ways to say it. She seasons her recital, recorded live at Cammilleri Hall, with music of her native Japan (Teiichi Okano's "Hazy Moon," the traditional "Cherry Blossom, and Hachidai Nakamura's "Look at the Sky." This "Japanese Medley" is beautifully consonant and perfectly integrated. Mabuchi's own "Sona's Song" reflects the many influences heard in her playing, without sounding rote. The song demonstrates the pianist's grasp of the dynamics and drama of performance. Sonny Rollin's "St. Thomas" closes the disc with Mabuchi stirring things up with her shifting time patterns and tempos. I suspect we will here much more from this young musician and will be better for it. 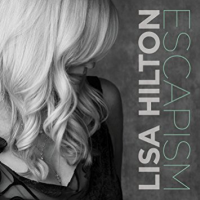 Pianist Lisa Hilton has left an impressive creative footprint over the past twenty years, releasing the same number of recordings in that time. Of the most recent releases, her notable recordings include, Day and Night (Ruby Slippers Productions, 2016); Getaway (Ruby Slippers Productions, 2013), and American Impressions (Ruby Slippers Productions, 2012). Her 20th recording, Escapism continues her probing investigation of the American jazz landscape. Hilton has a knack for distillation, which is reducing music to its essences: harmony, melody, tempo, rhythm. Whether it is a crack take on the 1950s Blue Note Songbook, circa Donald Byrd, Lee Morgan, and Hang Mobley as on Hilton's "Hot Summer Samba" or her treatment of the Lerner and Lane composition "On a Clear Day) " (the only standard among 9 originals. On five of the selections, Hilton is joined by trumpeter Terrel Stafford and tenor saxophonist JD Allen, both musicians sharing a great simpatico with Hilton and her minimist vision. 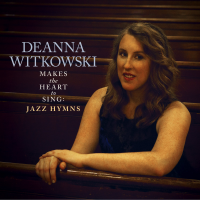 When I met (electronically) Deanna Witkowski, I had asked her, with that magisterial Polish name, if she were Catholic (that long ago, it was politically correct to ask such a question). If I recall properly, she told me no, but she was in the process of conversion to Roman Catholicism. Why all this talk of the Providence and the Spiritual? Makes the Heart to Sing: Jazz Hymns, that's why. While I may have the story wrong, the intention is not. The Spiritual has always been a font of inspiration and improvisation, and Witkowski takes this to both heart and mind. I should add that this recording is light years from our initial introduction with Wide Open Window (Khaeon Records, 2003), a recording I included on my C. Michael Bailey's Best Recordings Of 2003. Her talent has deepened and grown large. Using a jazz trio with bassist David Foose and drummer Scott Latzky , Witkowski deftly adapts 15 pieces associated with the Christian Tradition into a cogent whole that is both compelling and beautifully consonant and resolving. What more can one ask of worship? 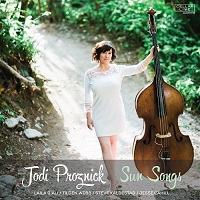 Original jazz composition has been enjoying a very fruitful period. This includes, particularly, vocal jazz. Canadian bassist/composer Jodi Proznick is the composer here with fellow Canadian vocalist Laila Biali. Sun Songs is a collection of eight Proznick originals and a Proznick-arranged treatment of "The Book of Love." The vibe of the collection is all clean air and space. Vocalist Tilden Webb proves a great vehicle for Proznick's considered lyrics and melodies. These same a well supported and embellished on by saxohonist Steve Kaldestad, whose soprano work is exceptional on "Little Bluebird." Pianist Tilden Webb brings a certain churchy framwork to "Let it Go," while flavoring "Storm" with '50s Blue Notes. Proznick keeps it all between the ditches with a keen and precise sense of time, tempo and rhythm. 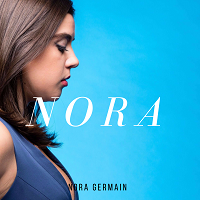 Musical polymath Nora Francesca Germain is the gold standard for youthful exuberance. In her brief career, Germain has released six recordings, including Let it Rip (Self Produced, 2013) and Little Dipper (Self Produced, 2014). With each recording, Germain has be defining and refining her voice, bringing this evolution to and impressive plateau with the present Nora. Germain starts her disc with a decidedly left turn into smart pop music, music that could have been made in the 1970s, 80s, 90s, 00s, 10s. Her writing is sharp and contemporary ("Saturday" and "Express Yourself") and at the same time. We do not hear her signature fiddle playing until "It's You or No One" which is jazzy crème brulee (you can just hear Svend Asmussen). Guitarist Jason Miles/Ingrid Jensen provides a nice solo and then accompaniment on "If I Ruled the World." "Nora's Blues" is a great jump piece that simply allows her excellent bassist Nick Campbell plenty of walking room. Pianist Rai Thistleethwayte turns in a grand solo before Germain whistles her way through to the end. Nora Germain is so talented there is no telling where she will go next. It will be fun to find out. 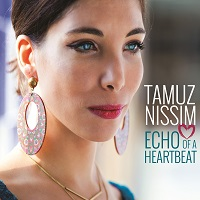 Tasmuz Nissim
Echo of A Heartbeat
Street of Stars Records
2018

NYC based-Israeli Jazz singer, composer and pianist Tamuz Nissim follows her provocative 2017 release, Liquid Melodies (Self Produced) with a quantum leap into scat and vocalese, joining other contemporary practitioners Dorian Devins ( The Procrastinator), Alyssa Allgood (Out of the Blue) , and Andrea Claburn (Nightshade). Joined by guitarist George Nazos (from Liquid Melodies), pianist James Weidman, bassist Harvie S, and drummer Tony Jefferson, Nissim takes a be bop bite out of the jazz instrumental song book by penning lyrics to Dexter Gordon's Fried Bananas," {Dizzy Gillespie}}'s "Groovin' High," and new lyrics to Charlie Chaplin's "Smile." It is gratifying to watch a rebirth of scat and vocalese jazz. What a great way to start the year.