Laced with a pulsating West Coast cool energy, the award-winning composer and acclaimed pianist Lisa K. Hiltons’, recordings are imbued with subtle historical references from a wide variety of genres and eras, sounding distinctly twenty-first century and uniquely of her own style. Her compositional inspirations do spring from jazz legends Thelonious Monk, Count Basie, Horace Silver and Duke Ellington, but they also include her favorite bluesmen, Muddy Waters and Robert Johnson, touches of minimalism from the likes Steve Reich, rhythmic swatches from modernists such as Prokofiev and Bartok or chords from rockers like The Black Keys or Green Day – they all hold sway in Hilton’s imagination when she composes.

Originally from a small town on California’s central coast, Hilton studied classical and twentieth-century piano formally from the age of eight, where she was inspired by her great uncle, Willem Bloemendall, (1910-1937), a Dutch piano virtuoso 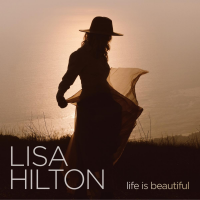 This evocative video is by director Scott Miller with music composed and played by Lisa Hilton from the album Seduction.
3
News: Recording

Lisa Hilton and her trio, manifest a memorable experience on Life Is Beautiful, her third recording of the pandemic era, and the acclaimed pianist, composer, and producer’s twenty-fifth album as a leader. On it, Hilton indulges her love of the piano with ten original tracks and the cover gem, “Ernie’s Blues," (written by Ernie Wilkins). Backed ...

There's an affirmation of goodness to the music of pianist Lisa Hilton, a quiet something of a positive nature that is known intrinsically true. But the world and its crowded barges of babbling talking heads are frantically convincing us all otherwise. So listen in to Life Is Beautiful before it's all too late. Without ...