By John Sharpe
October 9, 2022
Sign in to view read count 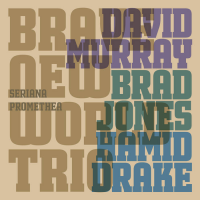 It's over 45 years since David Murray blew into the Lower East Side lofts from California. For a while he was near ubiquitous and amassed a discography to match. While releases have become less prolific in the decades since, he remains restlessly active, and Seriana Promethea by his Brave New World Trio ranks alongside his best. With a saxophone style strung between the twin poles of the New Thing of Albert Ayler and the earlier practices of Coleman Hawkins and Ben Webster, it is the latter which has exerted the greater pull over time.

The eight cuts, seven by Murray and one cover, comprise material honed on tour and subsequently captured in the studio in November 2021. Each is based around accessible song form, handled with aplomb by bassist Brad Jones and drummer Hamid Drake, who furnish a rock solid bottom end and a buoyant swing which allows the leader to go as far out as he wishes, but packs enough sass to grip tight when needed.

While there's nothing revelatory about Murray's playing, he is supremely accomplished, full of nuance, and a consummate exponent of the ballad. Hinting at his seminal experiences in the lofts, he colors his contemporary mainstream discourse with adroitly co-opted extremes and a preternatural command of the upper register. With his extraordinarily deep woody tone Jones proves a fount of melodic variation without missing a beat, both in counterpoint and when stepping forward. He can hold down the riffs with the best, but it's what he interpolates between which grabs the attention. Murray has always shown an affinity for strong drummers, as albums with the likes of Sunny Murray, Rashied Ali, Andrew Cyrille, Steve McCalland Elvin Jones attest, so his ten years and counting association with Drake comes as no surprise.

Murray wields his bass clarinet for the only time on the jaunty grooving title cut, establishing a percolating vamp in consort with Jones before spinning out ever expanding runs punctuated by the occasional excited yelp. Each of the tracks stays true to the parameters of the tunes, but Murray often stretches the boundaries, perhaps posing himself challenges in doing so. One such comes on the standout, "Rainbows For Julia," with its aching yet celebratory feel, where after setting out the theme he elaborates on it by running his notes together using a tremolo effect which he takes further and further into the weeds, while keeping the original refrain just about discernible. The overall impact is remarkable.

Murray similarly infuses the tradition with the avant saxophone lexicon to confound expectations elsewhere as well, whether with a legato which flows like lava over the rocky outcrops on "Necktar" or the spicing of his elongated lines with peppery exclamations on the upbeat "Switchin' In The Kitchen." "Anita Et Annita" convinces as tender double portrait, while Murray imbues Sly And The Family Stone's "If You Want Me To Stay" with an almost religious fervor. Classic jazz, but what sets it apart is that it is done so well with absolute conviction.

Seriana Promethea; Necktar; Metouka Sheli (Ballad For Adrienne); Rainbows For Julia; Switchin' In The Kitchen; Anita Et Annita; If You Want Me To Stay; Am Gone Get Some.