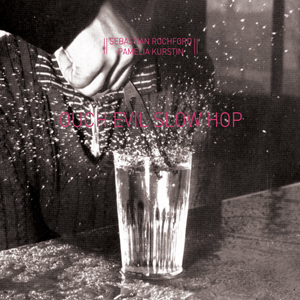 For eighty years, the Theremin has hovered on the fringes of music like a freak show exhibit at a carnival. Since its invention by Leon Theremin in 1928, it has been used mainly for novelty and, occasionally and more "legitimately," as a provider of colors, albeit colors from a limited palette, able to evoke only the eerie and the otherworldly. Almost never, outside 1950s' sci-fi movie soundtracks, has the Theremin been the main event. Until, that is, the last few years, when a handful of young electronicists, Pamelia Kurstin among them, has begun to expand the instrument's tonal and pitch ranges through the use of digital sound processors. Ouch Evil Slow Hop, a collection of free improvisations by Kurstin with drummer Sebastian Rochford, is an album which affirms the Theremin's right to be taken seriously.

It has been a long haul. Among the first jazz musicians to show an enthusiasm for the Theremin was keyboardist/composer/bandleader Sun Ra, back in 1947. At the time, Ra was working as an arranger for the Dukes Of Swing, a pocket big band led by Eugene Wright (the bassist in pianist Dave Brubeck's "Take Five" quartet a decade or so later). For the Dukes, Ra—who despite several attempts never mastered the instrument himself—wrote an arrangement of the theme music from Alfred Hitchcock's 1945 movie, Spellbound, which had featured the Theremin.

Another early enthusiast was composer/bandleader Les Baxter. The exotica originator's LPs Perfume Set To Music (RCA, 1946) and Music Out Of The Moon (Capitol, 1947) both featured the Theremin, played by Samuel Hoffman, a Los Angeles podiatrist who had performed on the soundtrack of Spellbound.

From the 1950s through the 1980s, the Theremin was toyed with by a few other jazz musicians, before in recent years being taken up by fusion and avant rock players. It is likely, however, that nothing will have prepared you for the sounds Kurstin coaxes from the Theremin; unless, that is, you know her extraordinary solo album, Thinking Out Loud (Tzadik, 2007), or her work with reed player John Zorn. The original, ethereal sound of the instrument has been exploded by Kurstin, through processing devices and her own artistry, into a virtual orchestra—crunching, "industrial" percussion effects, walking bass lines, rainbow-mutated guitars, strings and horns, plus a galaxy of unfamiliar sounds.

For the most part, Ouch Evil Slow Hop makes little play with the traditional character of the Theremin, focusing instead on sonics of Kurstin's own making. In this, Kurstin is well-complemented by Rochford, of Polar Bear, Ingrid Laubrock, Acoustic Ladyland and Fulborn Teversham repute. Rochford was among British jazz's early adopters of electronica, working fruitfully with electronicist Leafcutter John in the mid-2000s. He and Kurstin work as closely together here as a single pair of gloves, on seven free-improvisations which were edited by Rochford and co-mixed with Portishead's Adrian Utley. Adam Holzman is rather unnecessarily added to the closing track on synthesizer: after what we have heard earlier from Kurstin, he sounds, unusually, more retro than futuristic.

At 31:21 minutes, Ouch Evil Slow Hop goes by quickly. Quite where the Theremin will go in jazz and improvised music remains to be seen, but—perhaps for the first time—there is now the certainty that it will go somewhere of substance. Kurstin gives notice that the days of the instrument's freak-show status are numbered.

About Sebastian Rochford and Pamelia Kurstin