By MARK SULLIVAN
January 19, 2018
Sign in to view read count 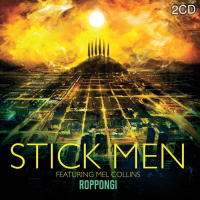 Stick Men is a long standing offshoot group from the iconic progressive rock band King Crimson. Founded in 2007 by drummer Pat Mastelotto and Chapman Stick players Tony Levin and Michael Bernier, it took its name from the unusual instrumentation of two Stick players. Mastelotto recently joked that if they knew it would go on so long, they would have thought of a better name. Since touch guitarist Markus Reuter replaced Bernier they have continued to compose new material, also incorporating collective improvisations and arrangements of King Crimson songs in live performance.

The trio welcomed King Crimson saxophonist/flutist Mel Collins to guest for six concerts in Japan in 2017, as they had with ex-King Crimson violinist David Cross in 2015 for the album Midori (Moonjune Records, 2016). The set draws from the Stick Men albums Open (Self Published, 2012), Deep (Self Published, 2013) and Prog Noir (Iapetus, 2016). There are also some collective improvisations and several King Crimson songs. Collectively the entire group has substantial King Crimson performance experience to draw on. Collins originated the horn parts on some of the earlier material, and is in the current large group with Levin and Mastelotto (who have both had long tenure in earlier versions of the group). While Reuter has never been a member of King Crimson, he participated in The Crimson ProjeKCt, which performed King Crimson music with the combined forces of the Stick Men and the Adrian Belew Power Trio.

ADVERTISEMENT
Collins fans will not be surprised to find that he was game to join in on material both new and familiar, as he demonstrates by adding flute to the opening Stick Men original "Hide The Trees" He is a fearless improviser, but is always sensitive to the other players, augmenting the group sound without calling attention to himself. He is in familiar territory with "Lark's Tongues in Aspic, Part 2," which is given a spirited performance. As in the rest of the King Crimson material the performance has a looseness and energy quite different from the very rehearsed larger group. This may actually be Collins' first exposure to "Sartori in Tangier"—I couldn't find it on any of the tour setlists—he sends his soprano sax through an electronic doubler, as he does in some other places to blend better with the frequently electronic sounds.

He does sit out the vocal tracks, which have more fixed arrangements. Levin sings his beautiful poem "Crack In The Sky" (dedicated to the late guitarist Allan Holdsworth) and two versions of "Prog Noir." There are many other highlights in the more than two hours of music on Roppongi. There is the ambling, atmospheric collective creation "Ookami," with searching tenor saxophone (the instrument also used on both versions of "Level 5"). "Industry" features a long soundscape introduction (again with tenor saxophone) before launching into the familiar thumping rhythmic crunch. Collins' playful side shows itself with a quote from Duke Ellington's "Take The A Train" during his "Shiro" solo. And Reuter does a terrific job imitating Robert Fripp's famous "banjo" guitar solo on "Sailor's Tale." The players sound like they are having a blast, and Stick Men and King Crimson fans are guaranteed to have one, too.