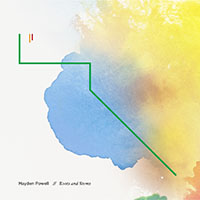 For those who think the Norwegian jazz scene is all about electronics, sampling and processing (not that there's anything wrong with that), one look at Hayden Powell, born in England but relocated to Norway as a young child, and any such accusations and generalizations are quickly put to rest. A trumpeter on the ascendance with Magic Pocket and the esteemed Trondheim Jazz Orchestra, Powell recently replaced Mathias Eick in Finish pianist/harpist Iro Haarla's quintet, and so it's only a matter of time before the trumpeter makes a showing on an ECM recording and garners more international acclaim.

Until then, with the internet making access far easier, his trajectory with TJO and Magic Pocket has been easy to follow, as well as Powell's own recordings, starting with 2011's appealing The Attic (Inner Ear), a sextet date also featuring saxophonist Tore Brunborg, who's gotten a lot of international ink for his work with artists like Manu Katche, Tord Gustavsen and Ketil Bjornstad. Roots and Stems reduces The Attic's sextet to a trio, capitalizing and deepening the chemistry begun on that recording. Rejoined by pianist Eyolf Dale and bassist Jo Skaansar, Powell's decision to eschew a drummer might categorize Roots and Stems as chamber jazz on paper, but it actually swings with a propulsive verve in places that's both a complete and pleasant surprise.

Not that everyone has to swing, nor should a modern young trumpeter like Powell be expected to, growing up in Molde, population 24,000, nestled in the midst of 222 mountains on the huge Molde Fjord. There's not a standard to be found amongst Roots and Stems' 10 original compositions—nine by Powell and one, the majestic closer, "Quiet Exit," by Dale that features a particularly impressive solo from Skaansar. Dale's career has been on an upward trajectory, too, as half of the piano/sax duo Albatrosh, which has been building a reputation from its 2009 debut, Seagull Island (Inner Ear), through to its most recent Yonkers (Rune Grammofon, 2012). Dale also has two solo piano recordings out, both demonstrating him to be a sensitive, intuitive improviser—qualities that render him an ideal partner for Powell, a trumpeter whose tone may be orthodox, but whose approach is all modern.

A lyrical player who can get a little greasy, a little rough-and-tumble when necessary, Powell and his trio mates winds their way through Roots and Stems, ranging from the late night ambience of the balladic title track and more angular, middle eastern-informed complexities of the extended blues form of "Bassclarinetteblues"—driven resolutely by Dale's firm left hand and Skaansar's relentless bass line—to the more ambling "Skysailing," darkly lyrical "Maysong" and a brief a capella miniature, humorously titled "Self-Calibration #3."

Throughout Roots and Stems, there's the sense that this is an album that couldn't have been made anywhere but Norway, and yet bears redolence of at least some aspects of an American tradition long gone global. With little muss or fuss, Powell and his band mates have fashioned an album whose touchstones may be broad, but whose underlying adherence to traditional precepts make Roots and Stems an album with undeniably broad appeal.