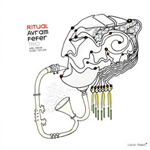 Saxophonist Avram Fefer has led a diverse career since his emergence in the early 1990s. An eclectic collaborator, Fefer has performed with pianist Bobby Few, The Last Poets, North and West African musicians, numerous acid jazz and trip-hop artists, and served in the big bands of Frank Lacy, Adam Lane, Butch Morris and David Murray, among others.

Ritual finds Fefer reunited with his longstanding trio-mates, bassist Eric Revis and drummer Chad Taylor, whom he first met in the mid-1990s. Revis is widely known for his work with Russell Gunn and Branford Marsalis while Taylor's colleagues range from Rob Mazurek, Marc Ribot and Matana Roberts to indie rock acts like Iron and Wine and Sam Prekop.

Fefer's sensitive side materializes on the lyrical ballad "Feb.13th," bolstered by Revis' supple pedal tones and Taylor's scintillating accents. The similarly mournful "Ripple" climaxing with a crescendo of circuitous tenor volleys. An adept multi-instrumentalist, Fefer's soprano soars over the funky rhythm section feature "Club Foot" while his pungent alto scorches the frantically angular "Outspoken" and his vocalized bass clarinet ambles through the languorous modal vamp "When The Spirit Moves You."

The harmonically austere setting of the trio format is often seen as a proving ground for saxophonists. Complemented by a congenial rhythm section, Fefer's burly timbre, pithy phrasing and taut lyricism make Ritual a stellar example of the trio tradition.