Svend Asmussen: Rhythm Is Our Business 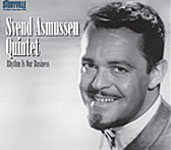 Once, as they were jamming, Duke Ellington's drummer Sam Woodyard called out to Danish violinist Svend Asmussen, "Man, you play your ass off," to which The Fiddling Viking replied, with that charmingly naïvely innocent wit so typical of his homeland, "From now on then my name is only Mussen."

There is just one Svend Asmussen and today, at the age of 93, he is a Danish national treasure, but let's assume, as the above anecdote implies, that in his prime he was two people. One—call him Mussen—was a world class jazzman, playing with Benny Goodman, Ellington and Lionel Hampton, and jamming with his idols Stuff Smith, Ray Nance and Stephane Grappelli.

The other—call him Ass—was a star of the Danish variety stage, singing songs in broken English ("The whole world smiles to you"), telling silly jokes and occasionally chucking in a bit of virtuoso jazz violin just to show where he was coming from.

This compilation, although billed as "The Perfect Asmussen," features far more of the Ass than the Mussen, and has little place in the modern age. Did no one stop to think that it might be entirely inappropriate to regurgitate Asmussen's unembarrassed warbling of the old Uncle Tom number "Carry Me Back To Old Virginny," which celebrates the joys of slavery with lines like:

That's where I laboured so hard for old massa

Day after day in the fields of yellow corn

No place on earth do I love more sincerely

Than old Virginny, the state where I was born.

Asmussen, who is billed as a co-producer, was apparently oblivious to any offence that might be given in the Obama age by words such as these, along with references to "this old darkey." Indeed, he is quoted on the sleeve as saying, of the songs selected, "Yes, they do sound quite fresh after such a long time."

In fact, listening to the cod vocals and clichéd arrangements, it's hard to imagine that the 23 numbers on this album were recorded after Miles Davis' Birth of the Cool (Capitol, 1949).

In an enthusiastic but often incoherent sleeve note, Henrik Wolsgaard-Iversen, of the Danish Ben Webster Foundation, refers to Asmussen's quintet as "miraculous." He goes on to list this "quintet" as containing four members and the "sextet" five. An indication that the album—far from being "The Perfect Asmussen," as claimed—is actually a rush job best seen as being for domestic consumption only, despite the English (sic) sleeve.

Instrumentals, such as "Ellington Mood" and "Svend's Riff," come as a great relief, though Max Leth's vibraphone playing is often heavy-handed, as is Preben Oxbøl's drumming with the sextet. Jørgen Ingman's guitar playing, on the other hand, is light and airy and a joy throughout.

As for Asmussen, in the twilight of his years, he deserves a far better memorial than this unfortunate hotchpotch. Let's hope someone will one day sort the wheat from the chaff and provide it.

Rhythm Is Our Business; Panhandle Pete; Be My Life's Companion; Ellington Mood; Svend's Riff; Someone To Watch Over Me; Darktown Strutters' Ball; Schöner Gigolo; Cotton Tail; Indian Summer; After You've Gone; When You're Smiling; Moonglow; Carry Me Back To Old Virginny; Fiddler In Rio/Umbrigado; Jeepers Creepers; Svend's Blues; Poor Butterfly; Georgia Camp Meeting; Hallelujah; Honeysuckle Rose; How About You?; Jazz Me Blues.