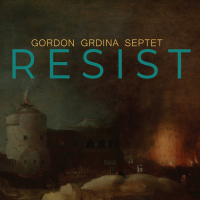 It takes a leap of unconditional faith to enter wholly the resistance. A mindset steadied for the long haul, readied for the next. On his third, integral, must-listen-to release of 2020, Canadian oudist/guitarist/composer Gordon Grdina grandly, darkly, intently, espouses all that and more. Hellbent on creating art as a political act, the sprawling, at times majestic Resist follows the raw and persuasive Nomad (Skirl, 2020), an uncompromising trio outing with pianist Matt Mitchell and drummer Jim Black and the simultaneous release of Safar-e-Daroon (SongLines, 2020) his Middle-Eastern/free fusion experiment with his Marrow quintet

Never content to follow one musical shape, as if following the hard winds of wanted or unwanted change, Grdina's unerring investigative prolificacy hits on a new geometry each time out. Creating the septet stage by uniting his long-standing rhythm machine of bassist Tommy Babin and drummer Kenton Loewen, his equally stalwart East Van Strings-cellist Peggy Lee, violinist Jesse Zubot and violist Eyvind Kang, with the subversive sax of Jon Irabagon,Grdina and company set out on a lush, urgent and agitated accounting of our world at large.

But unlike cable news and its blathering heads, the five brooding and brimming Grdina compositions that coalesce to create Resist's keep the conversation tight yet open to interpretation. Open to new ideas wherever and whenever they may and must arise. Especially written for a performance at the 2016 TD Vancouver International jazz Festival, the centerpiece is the 23 minute title suite, an earthy, free-flowing amalgam of all Grdina's thoughts on the sad state of affairs in which the world finds itself. Emotive to the plight of all, he lets his players speak their minds, expressing their concerns and hopes. The strings feature first in a slow, forlorn movement along a barren, embattled landscape. After six minutes of this mournful allure, Grdina, Loewen, and Babin break the troubled aura, clearing the way for Irabagon to set fire to the battlefield. The piece then weaves all together—as it should, as the world should—building, fluttering, falling back, culminating in a swelling, hopefully optimistic finale.

Irabagon's slurring, punchy stabs front the trio on the off-kilter bop of "Varscona" until a squealing rain of raw strings, like the furtive, heightened cries of justice from refugees along the way, slices the track in two. Above this caterwauling Grdina sails until the track ends on something so unexpected from what has transpired to that point: a smiling, purely cathartic, jumping swing. "Resist The Middle" and "Ever Onward" then purposely and exultantly revisit "Resist's" active minimalism and kinetic flow.