BY JOHN KELMAN
September 1, 2010
Sign in to view read count 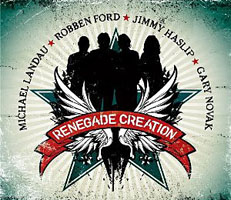 While by no means an absolute, there's a strong case for great jazzers making great rockers: Larry Carlton with Steely Dan and Michael Jackson; drummer Steve Gadd with Eric Clapton and Paul Simon; and saxophonist Michael Brecker with Billy Joel and Blue Oyster Cult. Renegade Creation's four artists may possesses a broader jazz vernacular, but it's all in service of the grit and grease of an unequivocal rock record, from the Bo Diddley beat of "What's Up" and slow grind of "Destiny Over Me," to the visceral blues-rock of "The Darkness" and "Who Do You Think You Are."

Better-known for the artists he's played with, including James Taylor Quartet, Jennifer Warnes and Aaron Neville) than his own, relatively diminutive discography as a leader, guitarist Michael Landau's Live (Tone Center, 2006) was a potent mix of hard-edged blues-rock and even more pyrotechnic fusion. With his bigger name as a leader, guitarist Robben Ford's busy career as a sideman with Bonnie Raitt, Bob Dylan and Miles Davis has informed the power blues of albums including his recent Soul on Ten (Concord, 2009) and Larry Carlton's Live in Tokyo (335 Record, 2007). Jimmy Haslip's busiest gig has been with the group he cofounded thirty years ago (Yellowjackets), but the bassist has recorded with everyone from Ron Wood and Crosby, Stills & Nash to Bruce Hornsby and Rod Stewart. Drummer Gary Novak's cred has been established across genres with artists as diverse as Allan Holdsworth, Rob Zombie, Alanis Morissette and Joe Locke.

With a collective résumé this expansive—playing everything from in-the-tradition jazz to pedal-to-the-metal rock with absolute authenticity— it's hard for Renegade Creation to miss. Fans of Jing Chi—Haslip's power trio with Ford and drummer Vinnie Colaiuta, last heard on 3D (Tone Center, 2004)—will find plenty to like with Renegade Creation's rockier disposition, though the emphasis here is on songs, with Ford and Landau splitting lead vocal duties on eight of its eleven original tracks. Landau possesses a hint of Mark Knopfler's lazy delivery, especially on "Where the Wind Blows," while Ford's cleaner voice and more melodic delivery—not one of his strongest points in his early days, but strengthening with age—has rarely sounded better.

Both guitarists combine pure rock 'n roll cred with greater sophistication, proving the two can coexist on tracks like Ford's "Soft in Black Jeans," where overdriven, Hendrix-ian guitars mesh with shimmering acoustics and a hint of indie rock, all with a series of chord voicings far beyond power chords and simplistic harmonies. Renegade Creation largely focuses on Landau and Ford's solo prowess and tasty tones, but when Haslip solos—as he does with frightening Mu-Tron'd speed on the powerful closing instrumental "Brothers," bolstered by Novak's thundering toms—it becomes an instant highlight.

High octane, and unapologetic in its raw, blues-centric rock stance, Renegade Creation couldn't have been made by anyone but musicians who possess broader backgrounds. But there's nothing but street cred in this exhilarating debut, from a group whose live performances will, no doubt, be absolutely incendiary.

What's Up; Soft in Black Jeans; God and Rock 'n Roll; The Darkness; Renegade Destruction; Peace Intro; Peace; Who Do You Think You Are; Where the Wind Blows; Brothers.