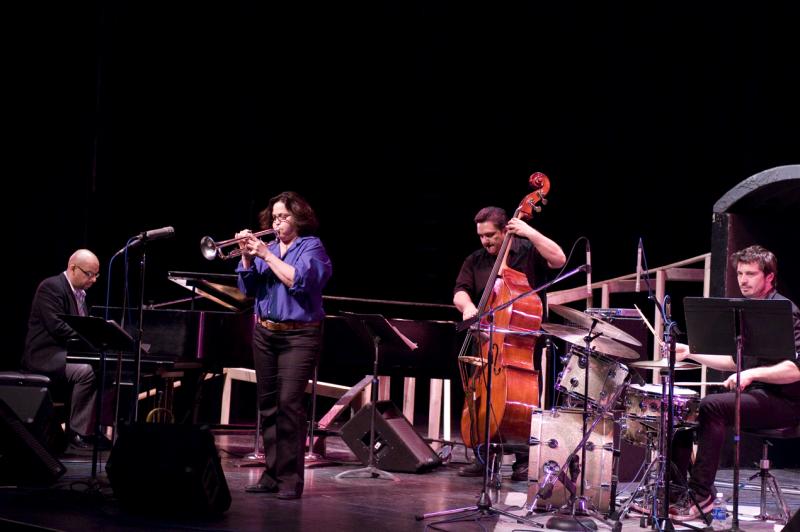 Trumpeter Rebecca Coupe Franks brought her own brand of lyrical mainstream jazz into the Saville Theatre, along with her New York pianist and several Los Angeles colleagues. Franks, who now resides in upstate New York, stopped in San Diego while on a short, west coast tour. The rhythm section had a few dates under its belt and, together with the superb pianist Luis Perdomo, Franks had all the makings of a working quartet.

L.A. double-bassist Rene Camacho held down the bottom end, and he possessed a singular, identifiable sound, making his frequent solos a real treat, while up-and-coming percussionist Andy Sanesi provided a fresh, swinging aesthetic to Franks' compositions. Perdomo is a pianist to watch for: he played with an original concept that seemed to be fused from elements of Herbie Hancock's early '60s work, along with some strains of McCoy Tyner's harmonic approach, albeit without the thunderous left hand.

Franks' set concentrated on all new material, save for the concert opener, "Thursday." This tune had a joyous, gospel feel to it, with an attractive melody that suited Franks' understated, subtle style. From there, the group launched into a jazz funk tune very reminiscent of Lee Morgan's iconic "The Sidewinder," from his 1963 Blue Note release of the same name. Her version was titled, aptly, "Blue." Franks let her chops fly a little with this tune, with a fat nasty solo that climaxed in her shaking a note in the upper register like a Pit Bull with a Chihuahua in its jaws. Perdomo followed, and he managed a thoroughly swinging solo that danced around the insistent backbeat.

Franks picked up her flugelhorn for the next piece, a lightly grooving Latin tune, demonstrating a centered, golden timbre on the larger horn. Perdomo showed a deft, intelligent sense of voice-leading with both hands, and his solos were marvels of creative construction. It's easy to see why bandleaders like Ravi Coltrane and Miguel Zenon seek his services.

Camacho got a turn in, demonstrating a unique style that navigated the divide between Charlie Haden and someone like Dave Holland. Camacho's thing is letting the big meaty notes of the lower register ring, while gradually building to longer, faster thematic statements. He eschews the thumb-position for the most part, which makes his contributions even more unique, because that's not a path often taken by his contemporaries. Camacho was supported tastefully by Sanesi's creative ride cymbal/rim-shot combination, which elucidated the groove while allowing the bassist to be fully heard.

Franks chose another new original next, her sumptuous, suspended ballad, "Open Heart." The trumpeter may one day be more well known as a composer, because she writes some excellent material, firmly grounded in the tradition, while still sounding very personal. After a short, sweet trumpet solo, Perdomo took over, and it was a marvel to watch him patiently build a masterful, pointed statement.

Things took a hard bop-ish turn with "Genetic Makeup," which burned from the first bar. Franks broke out all of her chops on this one, with lightning fast runs, manic trilling and piercing forays into the upper register. Perhaps inspired by Franks' display, Perdomo launched into a powerful, complex and chromatically dense solo; easily his best of the evening. Camacho followed, and kept up the harmonic intensity and furious tempo with his own astonishing solo.

Franks took a break from the all- brand new material, with"Mass," from her latest album, Check The Box ( RCF Records, 2010). This one rocked with Pentecostal fervor from the get-go, its theme was part "Boogie-stop Shuffle" (Charles Mingus) and part Henry Mancini. Franks began her wicked solo with a Harmon mute, but quickly discarded it when the solo built up more steam than the mute could handle. Perdomo took over, red-hot, eventually quoting "Flight Of The Bumblebee," among other things. Camacho rocked a Mingus-ian solo, and the ensemble traded explosive fours with Sanesi, before taking the tune out. Instant highlight.

Franks' performance at the Saville was an ever-present reminder of how satisfying mainstream acoustic jazz can be, when played expertly by masters of the idiom. Franks, Perdomo, Camacho and Sanesi all fit that description perfectly.