By JAKOB BAEKGAARD
September 8, 2016
Sign in to view read count 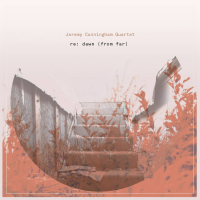 Since he moved to Chicago in 2009, Jeremy Cunningham has been a vital addition to the jazz environment and his debut as a leader, re: dawn (from far) , shows an assured musician and composer who effortlessly taps into the great musical tradition of the city.

Cunningham has teamed up with one of the architects of the modern Chicago sound, guitarist Jeff Parker, who lends his signature sound to the album. His chugging rhythms, beautiful harmonies and spiky melodic runs grace an album that is both mellow, swinging and sophisticatedly funky.

The opener, "Bembé," with its vibrant world rhythms brings to mind the work of another Chicago-resident, drummer Ted Sirota, with whom Parker has also played. However, the group quickly gets into its own groove and throughout the album, the melodic and empathic dialog between the musicians is a joy to behold. A track like "Constituent" is a fine example of the relaxed, swinging sound that the group can conjure, but there is also a wealth of details and textures to explore in the tune. The music might be easy to listen to, but it is not easy listening.

On "Leaves Rain," tenor saxophonist Dustin Laurenzi is invited to join alto saxophonist Josh Johnson and the result is a study in organic improvisation worthy of the famous saxophone duo, Lee Konitz and Warne Marsh. The changes in textures develop from almost ambient quietness, with Cunningham playing the cymbals very lightly, to a laidback, bouncing groove.

The core group on the album consists of Cunningham, Johnson, Parker and bassist Matt Ulery, but keyboard- player Andrew Toombs is another guest and he colors the music as well. His sounds span the electryfing Wurlitzer on "Bembé" and acoustic piano lyricism on "Far From," a composition that also highlights poignant saxophone lines and a nice guitar solo from Parker.

The album ends with a ballad, the strolling "Visions," with Cunningham marking the rhythm minimally, almost casually. It is cool jazz with feeling, which could also be said about the album as a whole. re: dawn (from far) is a strong debut from Cunningham and one can only hope that he will be able to keep this group together. They have something special going on. They play a type of modern jazz that is both emotional and intellectual, traditional and modern. In the hands of these musicians, the future of jazz is safe and sound.