By C. Michael Bailey
September 8, 2016
Sign in to view read count
Who on earth invented the power trio? It might be easy to say Cream or Jimi Hendrix, as they were pioneers, but who first? It could be Buddy Holly and the Crickets or Johnny Cash and the Tennessee Two (if we could call them "power" trios). No matter what, all examples have the blues as their common thread. The tradition of the blues power trio remains alive, well, and recording, as we can see here. 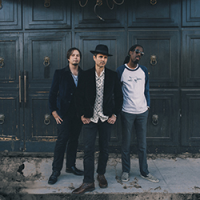 Presently considered is a second Stachela EP, this one containing four original compositions, again all quite different. "Handle It" is held together with a molten and relentless guitar riff that is as fresh as it is devastating. "Firefly" begins with a New Orleans march beat, descending into a funkfest instrumental. It is structured to allow great space for soloing. "Weight of the World" is a provocative combination of Sonny Landreth, The Police, and REM. Stachela achieves that full-bodied, overdriven slide guitar whine so present in Landreth's playing. Think "Losing My Religion," "Roxane," and "Congo Square" all deep fried for the Arkansas State Fair. It is definitely the high point of the EP. But, Stachela is not finished. "Automatic Pistol," a chunky slide guitar blues, remains firmly in the vernacular. It is time for Johnny Stachela to put together a full CD. More than time. 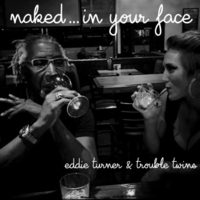 It's hard to tell who is the principal here, journeyman guitarist Eddie Turner or bassist Anna Lisa Hughes. I don't reckon it makes any difference. This collection of nine, mostly original compositions, performed live at the Blues Can in Calgary, AB, reveals the evolutionary depth of the genre. Turner composes and plays a blue more informed by his Denver home and points west than by Mississippi or Chicago. He possesses guitar chops both standard and slide that are impressive, but he never shows off, keeping everything between the lines. We get a full measure of Turner on his opening composition "Jody," which he shares vocals with Hughes. Hughes offers her own soul-steeped "Mistreated" in which she allows Turner much solo space and multiple circumstances through which to play. His introductory solo is sinewy and serpentine, while his internal solo is soaring and searing.

Not content with the traditional 12-bar form, the trio explores all facets of the swampy Americana forms that the blues gave birth to. "Rise" is an extended narrative, driven by Turner's slide guitar and hypnotic singing. It is a blues dirge with undeniable momentum that emerges as a live free-for-all. Adding a strolling form, Turner evolves the blues dirge of "Rise" into the intimidating "Dangerous." Hughes turns in a respectable take on the Nina Simone-vehicle "Don't Let Me Be Misunderstood." The "power" in this trio is one of finesse. The songs all are short of perfection, that human touch being the most important part of the brew. 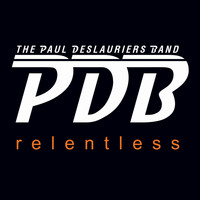 Well, we leave the traditional 12-bars behind with the Paul Deslauriers Band's Relentless and enter the Netherlands between blues and rock once inhabited by the giants from the American South and where is this bluesman with a French name from? Canada, of course. Not only that, but Francophonic Canada...I guess we all have the blues. Who the Paul Deslauriers Band reminds me of is a Cactus with finesse. In ten original compositions, Deslauriers displays an acute lead guitar ability bolstered by better-than average compositional skill. His arrangements are tight and performance exacting. This is very good music that finds itself in a deluge of very good music. I am glad that we have the selection that we have today, because there is something fo everyone. 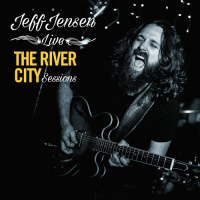 Memphis, Tennessee is two-and-one-half hours from my Little Rock home. It is also ground zero for American Music, a river town gone to seed, still hanging onto the fact that there would be no soul music without them. That is something that will never fade. Guitarist Jeff Jensen chose Memphis as the place he would record a live date of blues for his Live—The River City Session. Grand. He starts things off with Texas T-Bone Walker's "T-Bone Shuffle." He and his trio of bassist Bill Ruffino and drummer Robinson Bridgeforth create an environment for some serious music of the region...the Memphis soul of "Make it Through," the Delta crawl of "Empty Bottles," and finally the slooooow bluz of "Find Myself Alone" show that Jensen is not a one-dimensional artist, but one well versed in the Southern Vernacular. 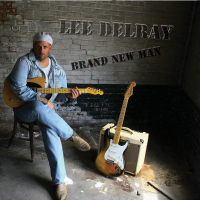 The Blues Tent is large enough to include everyone. That is the nature of all music. It is not like biblical Pharisees...that expect perfect adherence to the Law. That is the only way Caucasians have become blues artists. Lee Delray is a better than average slide guitarist and an exceptional composer who makes and effort of forwar the cause of the blues commercially. This is a tough market and the music Delray produces is better than his peers. He belongs in this power trio discussion because he is a very good guitarist who can play in a broad variety of musical environments. "I'll play the Blues for You" is out of the Robert Cray 1980s songbook, displaying that the tired 12-bars in not necessarily required for a 21st Century blues recording.