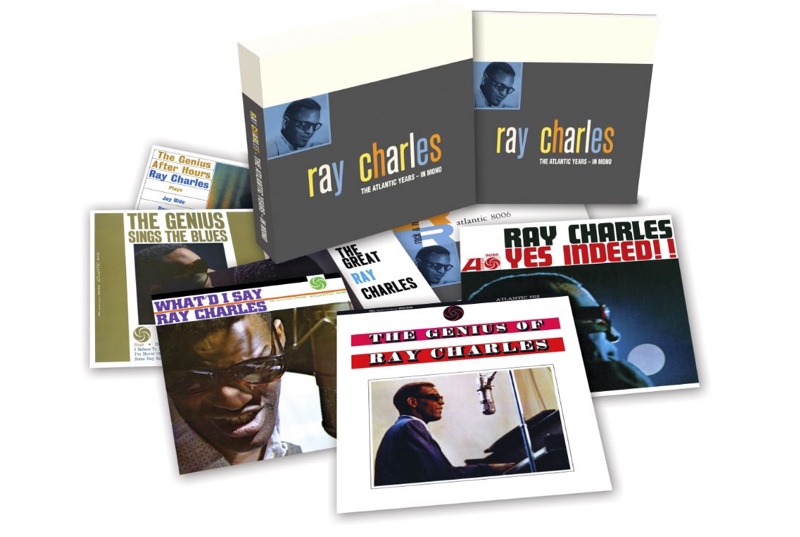 By C. ANDREW HOVAN
November 10, 2016
Sign in to view read count
Hot on the heels of their highly-touted vinyl project featuring the Atlantic sides of John Coltrane in mono, Rhino hits the vaults again for a comparable set that mines the work of Ray Charles in some of his earliest recorded works. A similar thread runs through both projects. A heavyweight box serves as a fashionable slipcover for the albums, which themselves sport glossy front covers. Mastering was done by John Webber and the albums were pressed in Germany, presumably at Pallas. In terms of overall quality and bang for your buck, the two sets are really hard to beat.

Speaking specifically about the Charles collection, seven albums recorded between 1952 and 1959 and released over a span of four years are included with this set, making for a total of 78 tracks. In release order, the albums are Ray Charles, The Great Ray Charles, Yes Indeed!, What'd I Say, The Genius of Ray Charles, The Genius Sings the Blues, and The Genius After Hours. What's not included are his live sets in Atlanta and at Newport, his production featuring David "Fathead" Newman's debut as a leader, and two sets that find him matching jazz wits with the great Milt Jackson.

Unlike the previously mentioned Coltrane box, a good deal of the music heard here was originally recorded and released only in mono. As such, devoted Charles fans will probably not hear much difference from the versions they are already used to hearing. Depending on the age of the material, there is also a great variance in sound quality. On the debut self-titled set, the iconic "Mess Around" was recorded in 1953, while "I Got a Woman" was cut in 1955 and "Hallelujah I Love Her So a year later. Another compilation of Ray's hit singles came with the 1958 LP Yes Indeed! and those sides spanned from 1952 to 1958. Even though the early tracks are thin in presentation, Ray's voice manages to be the unifying factor that speaks above all. In a nutshell, these iconic trinkets sparkle in their new transfers, probably sounding better than any previous reissue.

It is not an easy task to match album titles with recording dates and Atlantic had no qualms about issuing Ray's material in piecemeal fashion throughout his tenure. Focusing on just and drummer Joe Harris that was split between the albums The Great Ray Charles and The Genius After Hours, the latter of the two being issued as late as 1961. The sound is sparse with the drums fading into the background, yet Ray's piano sparkles and takes center stage. The tracks with horns added to the trio shine, thanks to the work of Quincy Jones, who would play a big part in the pinnacle album of Ray's Atlantic years, The Genius of Ray Charles

By 1959, Atlantic had developed a stellar roster that helped boost the bottom line of the fledgling label, allowing Ray to increase his production values. What'd I Say introduced a large ensemble that was one of Ray's most famous units, featuring David Fathead Newman and Marcus Belgrave. The title track, "Rockhouse" and "That's Enough" were all hit numbers that became staples for years to come. Even more ambitious, The Genius of Ray Charles featured one side with big band accompaniment and the other with backing by a string ensemble. Although the album received little recognition upon release, it has subsequently been heralded as one of Charles' most important albums. Modern CD transfers have been a mixed bag, but the results here on vinyl are totally satisfying.

The final set heard here would be Ray's last for Atlantic, 1961's The Genius Sings the Blues. It too is a compilation of various sides recorded with a large ensemble and with the blues moniker in mind. Even though it obviously serves as a cash cow for the label following Ray's departure, it has nonetheless become one of his most cherished compilations. The fact that "(Night Time Is) The Right Time" was featured in a famous episode of The Cosby Show probably was a boon to its popularity to boot.

As stated above, the fragmentary assemblage of these albums makes for a discographical and sound nightmare, yet the transfers do a great job at matching levels and the sound is consistently good from album to album. Like on the Coltrane set, I found these 180-gram pressings to be flat and generally quiet. The jacket covers are not quite as thick as with the Coltrane set, but the slipcase box is sturdy. Rounding out this beautiful package is a 30-page booklet featuring period photos and an essay by Charles biographer David Ritz. If this pattern of excellence continues, there's no telling what is in store. I for one would love to see Mingus and Aretha get the next nod in the mono series!