By Dan Bilawsky
November 10, 2016
Sign in to view read count 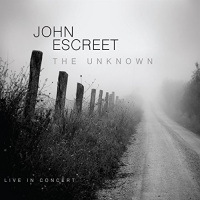 Stepping into the void without a map, compass, or guide can be an incredibly scary experience. But the very same scenario can also be liberating. Musicians freed of the shackles of preconceived ideas are the ones, after all, who speak the lingua franca of jazz—improvisation, that is—in its purest dialect. And improvisation doesn't get any truer than when there's a blank canvas to work with. That's all there is to know about The Unknown. Or is it?

Early in 2016, pianist John Escreet traveled to Europe for a mini-tour that brought his longstanding trio—with bassist John Hébert and drummer Tyshawn Sorey—into contact with British saxophonist Evan Parker, an icon and maverick in the world(s) of free jazz and improvised music. The band operated without blueprints or borders, and the evidence exists in the two lengthy tracks that make up The Unknown.

"The Unknown (Part One)" was captured at a concert at The Bimhuis on February 12, 2016. It's a sprawling, forty-five minute performance filled with chill-inducing and spine-tingling sounds and suggestions. But it all grows from baleful beginnings that thicken over the course of its opening. After several minutes, a din of cymbal crashes and other potent intoxicants drive away the demons. Pure zen juxtaposed against low-weight zaniness follows, as Sorey's clanging cymbal bells play against squeaking sonics. Parker's searching sax and Hébert's bass meet up, Escreet joins the party and takes center stage, band-made cacophony carries the music onward, and Sorey gets the spotlight for some rim-centric painting. It's a lot to digest, and that only covers about two-thirds of the performance. The final act of this creation places Hébert's springy bass against Parker's popping saxophone, gives the bassist his due, pairs Sorey's vibraphone with Parker's tenor, and finally departs on a hypnotic wave. It's heady stuff to hear on record, clearly not made for the meek.

The second and final track on the album—"The Unknown (Part Two)," recorded one day later at Lantaren Venster in Rotterdam—opens in cagey fashion with short, darting phrases. But madness sits just on the horizon. In no short time, the quartet is running wild. The group tramples everything in its path before the dust settles. Once things calm down, Escreet takes control and a hip groove forms behind him. The core trio then ratchets up the intensity, and just when it seems like things have run there course, Parker swoops in, a deus ex machina with horn in hand. He set the stage on fire before Hébert enters the picture with his calming ostinato and Escreet adds his gentle filigree. Peace ensues, with glistening piano and vibraphone centering and soothing the soul, but war remains in the wind. Parker returns and starts a skirmish with Escreet that throws the whole band into action mode. The toys eventually go winding down, leaving space for Sorey to get wound up for a brief spell before a fingernails-on-chalkboard episode takes the band on a journey to the outer limits. At nearly thirty minutes in length, the track seems compact compared to its predecessor but complete in its own fleshing out of an on-the-spot narrative. Getting to know The Unknown is no easy matter, but it's a rewarding experience for those willing to take the plunge.