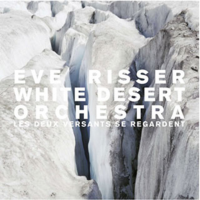 Space in jazz, in the musical rather than the science fiction sense, is a difficult thing to pull off effectively. Miles Davis may well have said "don't play what's there, play what's not there" but Mr Davis said a lot of things including "if you don't know what to play, play nothing." Its like talking quietly—if you want people to make the effort to listen what you do have to say, then what you venture had better be good. You can hear this in the playing of Wadada Leo Smith in his album of the year collaboration with Vijay Iyer, but perhaps more surprisingly there is a surefooted grasp of the dynamics of musical space in this excellent new collection from Eve Risser and her White Desert Orchestra.

Risser is a 24 year old Paris based composer and musician who, on the evidence here, sits comfortably in the spaces between jazz, improvised and modern classical music. She released a well received CD Des Pas sur la Neige also on Clean Feed records in 2013 on which she played solo prepared piano. Risser has said that the White Desert Orchestra links to this through her intention that the current ensemble is "a form of orchestration of the piano" -the ten fingers needed to play the latter, corresponding to the ten members of the ensemble.

The result is a visual music stimulated by the emotional shock Risser experienced on a voyage to New Mexico having seen how the surface of the earth bore the marks of huge historical geological damage. Her music gives a sense of the physical enormity of, for example, the Canyons but balances that strength and power with the realisation of the layered display of past experience in the landscape's scars. As a metaphor this clearly works at a literal geological level, but also at an emotional and physical human one. The link is made explicit in the penultimate track, the pacy "Earth Skin Cut," that takes inspiration from the similarities between the aerial view of a canyon and a scar on human skin. Here the ten piece presentation is both exhilarating and powerful as it races to a near apocalyptic conclusion. It is also a good illustration of Risser's intention to produce a music that is felt rather than intellectualised, where 10 years of study of musical theory is not required to make sense of it all.

The finest piece though is probably the immense title track. The intensity is raised slowly, feeling initially as if it is somehow allowing us to hear sounds of our planet which our ears cannot normally hear, before gradually building into the soundtrack for a slow drone flight above a remote mountainous region. Deep ominous bass is overlaid with the layered perspectives of trumpet, piano and flute as if flipping the viewpoint, but also present are more visceral effects presumably intended to symbolise the power of natural forces. It's a music to listen to closely, to give your full concentration to, but also to allow yourself to be lifted where it wishes to take you. Accessible enough to attract those who appreciate the power and the grandeur of, say, Icelandic post-rock act Sigur Ros, this should also play well with the jazz/improvised music audience.

The rest of the collection is strong throughout, whether that be in the Steve Reich meets free improvisation of "Shaking Peace," written by John Hollenbeck, or the way that "Tent Rocks" manages to mix the guitar attack of a Derek Bailey with an oblique rhythm and funkiness that somehow remains coherent. There is a particular pleasure to be taken in this sort of album, one that comes from left field to surprise and take you somewhere different, that is particularly enjoyable. The Spike Orchestra did this in 2015, and Eve Risser's White Desert Orchestra have achieved similar excellence in 2016. Enthusiastically recommended.