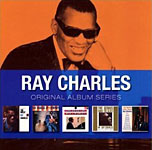 Singer and pianist Ray Charles' period with Atlantic Records, from 1953 to 1960, which is the subject of Warner/Rhino's Original Album Series, was the most exciting in Charles' long and well documented career. Preceding the country music years which began on ABC in the early 1960s, the Atlantic era found Charles recording albums rather than singles; establishing his own touring and recording band, and vocal group the Raelettes; and developing his unique blend of jazz, blues and gospel until, around 1958, it reached a level resembling a force of nature.

Ray Charles In Person (1960), recorded at a concert in Atlanta in 1959—with one microphone, but of remarkably high audio quality—is the most cathartic of all Charles' discs. On two tracks, "The Right Time" and "Tell The Truth"—both shared with the Raelettes' lead singer, Marjorie Hendricks—the music transcends art to become powerfully shamanistic. It remains one of the greatest rhythm and blues albums of all time.

Inexplicably, Ray Charles In Person isn't one of the albums included in the Original Album Series set, but another five masterpieces are: The Great Ray Charles (1957), Ray Charles At Newport (1958), The Genius Of Ray Charles (1959), The Genius After Hours (1961) and The Genius Sings The Blues (1961). The albums, each in a facsimile of its original front and rear sleeves, are packaged in a simple card slipcase.

The Great Ray Charles, an instrumental set for which Quincy Jones wrote most of the arrangements, was the album with which Atlantic introduced—or rather, reintroduced—Charles to the jazz audience. He'd begun his career leading a jazz trio (piano, guitar, bass) in the late 1940s, but by the start of the 1950s was better known for his blues-meets-gospel vocal singles, which were juke box hits throughout black America. Despite the absence of vocals, the disc establishes the singular mix of jazz, blues and gospel which would sustain Charles until the close of the 1950s.

The Genius Of Ray Charles is a departure from the previous two albums in featuring Charles in front of a big band comprising his regular group augmented by musicians from pianist Count Basie's orchestra—and a larger departure, on its final half dozen tracks, by having Charles sing ballads over Ralph Burns' arrangements for a string and woodwind orchestra. The sweetening on these tracks extends, perhaps, a step too far, with the inclusion of warbling, wordless backing vocals (most assuredly not by the Raelettes). But as it increasingly did in the years to come, Charles' voice transcends any weaknesses in material or context, delivering its trademark soul whammy.

The Genius After Hours is an instrumental set, mainly of blues-derived originals but also including Fats Waller's "Ain't Misbehavin,'" the Gershwins' "The Man I Love" and Weiss and Baum's "Music Music Music." On five tracks, Charles leads a trio, on the remaining three, a trio plus horns. Even more tellingly than does The Great Ray Charles, the album shows off Charles' talents as a bop and hard bop pianist. The tempestuous "Joyride" and "Charlesville" are straight, and convincingly, out of the Bud Powell tradition. The always on-song Newman turns in a particularly memorable tenor solo on "Ain't Misbehavin'" and Charles makes some winning recalibrations to the harmonic detail of "The Man I Love."


The Genius Sings The Blues is a collection of singles recorded 1953-59, and released after Charles had left Atlantic, with no personnel listings or recording dates. Enthusiasts will readily spot the early tracks, such as 1953's "The Midnight Hour" and 1954's "Feelin' Sad," made before Charles had assembled either his regular band or the Raelettes, and those masterpieces of a few years later such as 1959's "The Right Time" (heard on the audio clip below). The version of "I Believe To My Soul," also from 1959, is another three minutes of voodoo, a chillingly spectral reading including the Raelettes and with Charles on organ rather than piano. This final album in the Original Album Series may be something of a grab bag, but it is of the highest caliber throughout, just like the other four albums in the series.

Tracks: The Right Time; In A Little Spanish Town; I Got A Woman; Blues Waltz; Hot Rod; Talkin' Bout You; Sherry; A Fool For You.

The Genius Of Ray Charles

Tracks: Let The Good Times Roll; It Had To Be You; Alexander's Ragtime Band; Two Years Of Torture; When Your Lover Has Gone; Deed I Do; Just For A Thrill; You Won't Let Me Go; Tell Me You'll Wait For Me; Don't Let The Sun Catch You Cryin'; Am I Blue; Come Rain Or Come Shine.

The Genius After Hours

The Genius Sings The Blues

Tracks: Early In The Morning; Hard Times (No One Knows Better Than I); The Midnight Hour; The Right Time; Feelin' Sad; Ray's Blues; I'm Movin' On; I Believe To My Soul; Nobody Cares; Mr Charles Blues; Some Day Baby; I Wonder Who.