Sony's program of reissues from CTI—the label set up by producer Creed Taylor in the late 1960s, post Impulse!, which he also founded, and post Verve, where he had moved on leaving Impulse!—continues with one of the brightest jewels in the CTI vaults.

Like the sixteen discs which Sony have already reissued, pianist and composer Randy Weston's Blue Moses has not previously been released on CD in the US or Europe (though there was a 2006 Japanese issue). Like the 1972 LP, it comes in a gatefold sleeve, with all the original artwork intact, and is remastered from the first-generation, two-track analog tape.

For decades a cult item, Blue Moses is unusual among the many albums Weston has recorded during his long career. On paper, the fusion of his back to the roots, Maghrebi-drenched aesthetic and Taylor's svelte Manhattan sophistication—here delivered by a twenty-piece, brass-heavy ensemble—might look like a non-starter. In the event, Taylor and Weston pulled it off. Opposites do, sometimes, attract.

By 1972, Weston's approach had evolved from the hard bop style, much influenced by fellow pianist Thelonious Monk, that he had played when he began recording eighteen years earlier. His palette had broadened as it grew to reflect his fascination with African music, and by the late 1960s he had found his own, Africanized voice. (Traces of Monk have, however, continued to be heard in his music. "He was the most original I ever heard," says Weston. "He played like they must have played in Egypt five thousand years ago").

Weston learnt about African music first hand. In the mid-1960s—supported by publishing royalties from widely covered compositions such as "Hi-Fly" and "Saucer Eyes"—he left the US and traveled extensively in north and west Africa. In 1968, he settled in Rabat, Morocco, where he ran a nightclub for four years. Blue Moses was made at Rudy Van Gelder's New Jersey studio, at the end of the Rabat sojourn. By this time Weston had acquired deep knowledge of Maghrebi styles, and in particular Moroccan gnawa—a percussive trance and ritual music originated by black African musicians from the far south of the country. 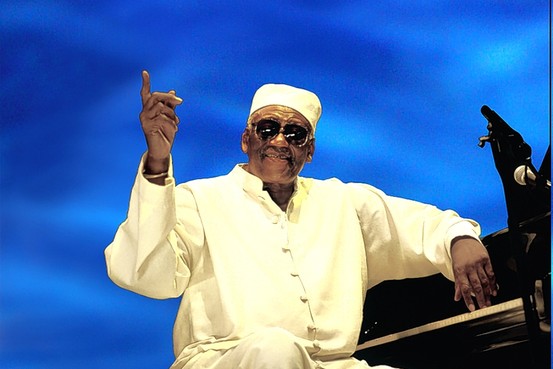 The album's title track, the 13:25 minute "Ganawa (Blue Moses)," so authentically inhabits gnawa and its unique drum and percussion patterns, that—despite having Weston majoring on an electric keyboard and fronting a big band (imaginatively arranged by Creed Taylor stalwart Don Sebesky)—it still reeks of kif, cumin and mint tea. As on all tracks other than the closing "Marrakesh Blues," Weston cedes the majority of the solo time to trumpeter Freddie Hubbard and tenor saxophonist Grover Washington Jr., concentrating instead on ambiance-rich comping and colorization. Like the listener, maybe Weston was too busy enjoying the arrangements—to which it sounds as though he had contributed substantially—to focus overlong on soloing.

The track is one of four top-drawer Weston compositions which make up the disc, and was the only one written for the project. Weston had first recorded "Ifrane" with a piano, bass and drums trio in 1965, for an album which did not see release until 1977, when Arista put it out as Berkshire Blues. "A Night In Medina" and the album's other extended workout, the 12:18 minute "Marrakesh Blues," had both been included on the outstanding African Cookbook (Polydor, 1969), made with bassist Henry Texier, drummer Art Taylor, and percussionists Azzedin Niles Weston and Reebop Kwaku Baah (both gnawa adepts).

As does "Ganawa (Blue Moses)," these three tracks resplendently survive their transition to CTI's lush house style, retaining their Moroccan character. Mostly, that character is sunny and hot. "A Night In Medina" is the only tune to introduce a chill. As Weston's liner note puts it: "(The composition) expresses my feeling of peace, but peace tinged with apprehension, during a three a.m. walk in the twisting streets of the Medina, the old city, in Rabat, on a night when the moon was full." The closing passage—all rattling percussion, djinn-like bass trombone and otherworldly vocal cries—can send a shiver up the spine.

It's a perfect little masterpiece on an altogether outstanding disc.