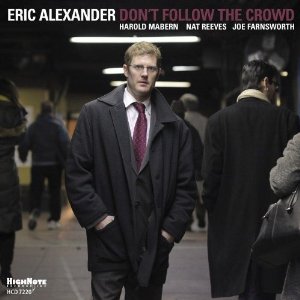 Tenor saxophonist Eric Alexander, now well into his forties and no longer the precocious young lion who burst on the New York scene some two decades ago, nevertheless remains the relentless hunter, avidly pursuing—and easily wrestling to the ground—obscure melodies that are beyond the pale of his contemporaries. Such diligence pays dividends again on Don't Follow the Crowd, on which Alexander heeds his own advice by including songs from such seemingly inapt films as The Deer Hunter and Shaft's Big Score! as well as a charming bossa ("Footsteps") by smooth jazz guitarist Steve Briody, a tasteful ballad ("She's Out of My Life") by an ex-beau of pop star Karen Carpenter and yet another ("Don't Follow the Crowd") written by filmmaker Spike Lee's father, bassist Bill Lee.

As a player, Alexander goes his own way too, as he always has, eschewing gratuitous bombast and squawking in favor of the kind of solid straight-ahead post-bop lines conceived by such eminent predecessors as Dexter Gordon, Wardell Gray, Hank Mobley, Gene Ammons and others, and carried forward today by the likes of Jimmy Heath, George Coleman and Joe Lovano. No imitation, simply admiration. Unlike some who have flashed meteorically across the jazz landscape only to crash and burn prematurely, Alexander has chosen a steadier course, performing regularly wherever and whenever the opportunity has arisen while recording more than 25 albums as leader of his own groups and nearly a hundred more as a sideman. In other words, Alexander has paid his dues and learned his craft, traits that epitomize more or less what to expect when he records an album such as this one.

On every recording, of course, the choice of material is disparate, as is Alexander's approach to it (solos are always fresh and persuasive, even within a proven framework). The support group also varies, albeit less so, as Alexander has a circle of musicians with whom he feels comfortable and prefers to work. In this instance, they are pianist Harold Mabern (a longtime friend and former mentor), bassist Nat Reeves and drummer Joe Farnsworth. Taken as a unit, "reliable" is their middle name. Alexander needn't worry about his teammates faltering or dropping the ball, even on his original compositions ("Nomor Senterbress," "Remix Blues"), touchstones such as Henry Mancini's "Charade" or the passionate "Cavatina" from The Deer Hunter.

If there's a word that best sums up Alexander's style and temperament, that word could be "consistent." On the one hand, he's not going to blow anyone away with some quick and impulsive change of plan; on the other, he always gives the music and the task at hand everything he's got. That's the essence of Don't Follow the Crowd, in which Alexander separates himself from the herd of musical sound-alikes who seem pleased to reach a certain level and remain there. That's never been his game.