By John Kelman
February 2, 2011
Sign in to view read count 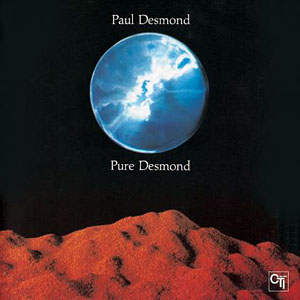 With a dry tone, and unhurried phrasing definitive of the emergent West Coast Cool—a relaxed alternative to the edgier hard bop coming from New York—alto saxophonist Paul Desmond had already made a name for himself with pianist Dave Brubeck's quartet on the legendary Time Out (Columbia, 1959). Desmond also wrote the tune that became Brubeck's signature, "Take Five," and, while he passed away too young at the age of 52 from lung cancer, he's left behind a relatively small but significant legacy of recordings that have sometimes become overlooked with the passing of time.

Pure Desmond was only one of two albums the saxophonist made for CTI (though he did record two albums with Creed Taylor for A&M, before the producer started his own label), but it's the absolute winner of the two. A small group album featuring the same three bonus tracks as a previous CD version, with CTI Masterworks' warm remastering and beautiful mini-vinyl-like soft digipaks, it represents a welcome return to print of an album that, despite alcoholism and heavy smoking, finds Desmond in great form just three years before his death in 1977. p> With label staple Ron Carter swinging comfortably with Modern Jazz Quartet and longtime Desmond musical cohort, drummer Connie Kay, Pure Desmond stands as one of the altoist's best records—as cool as a calming breeze on a summer's day and as dry as a good martini. The album—a blend of standards ranging from Duke Ellington to Antonio Carlos Jobim—also features the tremendously overlooked Ed Bickert, a Toronto, Canada native whose uncharacteristically warm-toned Fender Telecaster had already been heard in the company of fellow Canadians like flautist Moe Kaufman, and bandleaders Phil Nimmons and Rob McConnell, but whose star mysteriously never rose as it deserved, amongst peers like Joe Pass, Herb Ellis and, in particular, Jim Hall.

The tempo never gets past medium, but there's a simmering energy on some of the material, in particular the Jerome Kern chestnut, "Till the Clouds Roll By," heard here in two versions: the original album version, where Bickert's solo is the height of linear invention and occasionally bluesy bend; and a slightly longer alternate take where he builds a solo filled with rich voicings and single note phrases constantly accompanied with periodic chordal injections. The mix and overall tone of the alternate take is a little rawer, with Carter's bass a more visceral punch in the lower register.

Light Latin rhythms also define the session, with the by-then-popular "Theme from M*A*S*H" given a light bossa treatment, as is Jobim's "Wave," which closes the original album on a graceful note, but here acts as a gateway to alternate takes including the ambling opener, "Squeeze Me," and the Django Reinhardt classic, "Nuages," that skips the guitar/sax duo intro and heads straight into an ensemble reading.

With a supportive group that clearly gets the value of less over more, the aptly titled Pure Desmond stands, alongside The Paul Desmond Quartet Live (A&M/Horizon, 1975)—his other album with Bickert—as the pinnacle of this West Coast cool progenitor's career.