By Mike Jurkovic
September 26, 2018
Sign in to view read count 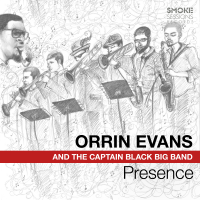 You have to wonder how many outlets a restless creative like hard bopping pianist Orrin Evans needs to fully express himself. Twenty-five or so albums into a legacy that finds him as the newest member of The Bad Plus after years of riffing and ripping it up with The Mingus Big Band, experimenting with soul/jazz Luv Park; solo successes—Faith In Action, (Posi-Tone, 2010); The Evolution of Oneself (Smoke Session, 2014)—and various collaborations, Evans still has a talent bursting with ideas that he channels through the explosively celebratory Captain Jack Big Band.

Named after his father's favorite pipe tobacco, even a scaled down Captain Black on Presence brings to the bandstand a veritable village of Evans' Philadelphia family. And they all shine bright. Caleb Wheeler Curtis and Todd Bashoreshare alto sax duties. John Raymond,Bryan Davis, and Josh Lawrence bring the trumpets. David Gibson, Brent White, and Stafford Hunter man the trombones. Hard honking, streetwise Troy Roberts blows a fierce and fiery tenor sax. Holding down the fort for all these guys to fly are bassist Madison Rastand the double drumming threat of Anwar Marshall and Jason Brown.

Recorded hot and live at Philly's South Jazz Kitchen and Chris' Jazz Cafe, this taut ensemble repeatedly gives the audience its money worth, breaking from the gate with the boisterous and bouncing "The Scythe." Evans brings his love of McCoy Tyner to the effervescent foreground, while Roberts shakes the rafters. A swirling dervish of a track, it is only the beginning. Fired up, the audience excitement is palpable as Roberts vigorously solos centerstage intro-ing the rousing post bop "Question" a brassy feast wherein each player readily picks up the other's challenge, pushing the music forward. Trumpeter Raymond's "Onward" is a thrilling ten minutes, shifting seamlessly from an almost anthemic conversation between Evans and Rast to trombones and trumpets signaling a sea-change of time and meter. Evans' "Flip The Script" is a swinging juggernaut, a mighty, Charles Mingus-like blast of reeds and rhythm. Roberts and Curtis are particularly locked in and exuberant as the pianist dodges in between in all, like a boxer trying to land the finishing punch on an ever moving opponent. "Trams" a Roberts' original, is all languid vitality, a bluesy, juke joint highlight. The title track is a raw performance and quite possibly the nearest thing on Presence that one could term traditional.