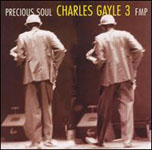 Like the Holy Trinity at the cynosure of Charles Gayle's religious faith the trio of leader, bass and drums exists as the foundation for nearly all of his music. Even his explorations into larger instrumentations have at their core the central stanchion of this steadfast template. Solo settings are the only other context where he is afforded greater liberty and as several recordings have documented this kind of absolute seclusion can sometimes work against him. It's no coincidence then that Gayle's previous recordings for the FMP label have followed a trio format. Working within the surface strictures seemingly inherent with the set-up Gayle still finds new methods of stating his thoughts and convictions that are unmistakably and irrevocably his own.

This time the trio is different than those featured in past recordings for the label. In place of Vattel Cherry and Michael Wimberly are the new faces of Gerald Benson and Gerald Cleaver and the change in composition signifies a very noticeable shift in sound from the opening strains of the "Delight." Cleaver's drums rise out of a dynamic range that is startling in its depth and diversity. Moving from scuffling brushes to tightly trained stick play his patterns are like a patting caress on the knotted head of Gayle's horn. Gayle butts and whinnies but the fervor boiling just inside the long throat his bell seems largely placated and he even strays into snatches of lyricism against the unexpected leash. Benson's throbbing lines are similarly reposed and the piece doesn't catch fire for several minutes leaving a full-on conflagration a long time in building. But far from being a hindrance the uncracked space and dimensional breadth plumbed by the three creates an unusual and fresh pigment in Gayle's sonic palette, one of measured and textured restraint. Sections of the closing "As Yourself" even sound almost playful as he bandies about melodic swatches over a churning rhythmic tide. His forays on piano on "Honour" and "Oh God" are equally in check often dancing along cleanly articulated lines. Again, as so often in the past, the song titles are stripped to the simplest of phrases and words. Titles, which like aural pictures, bespeak a thousand emotive connotations when translated into musical form.

In the liner notes to Berlin Movement Future Years, one of his earlier FMP recordings, Gayle is quoted as stating, "When the building is still standing in the end, we've failed." On this date, recorded several years later, he seems to be after the same thing, but intent on achieving it through far more subtle and subversive means. Instead of assailing the pillars of the venue and the audience with intractable intensity he erodes them with anodyne ardor and deftly funneled dissonance. The end result is the same, but the journey to the terminus is a different route entirely and one it turns out that Gayle has tread increasingly more often in the intervening years.

Delight/ Honour/ Your Grace/ Oh God/ Pray Always/ As Yourself.