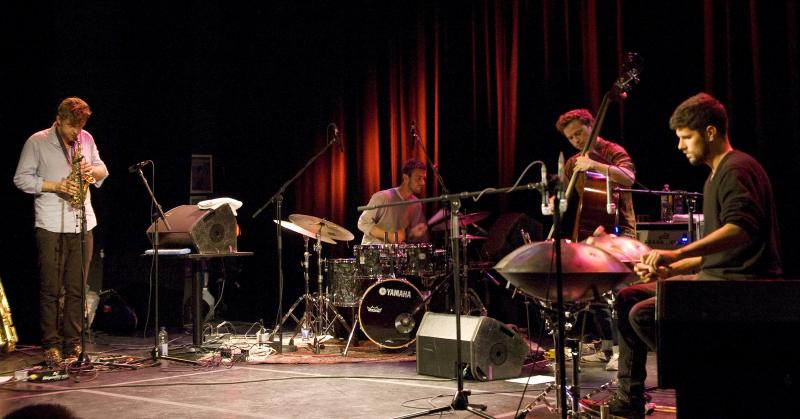 When we played Philadelphia, there was a guy with his wife, who had seen us busking in London, and now they're back here, and saw us, which was cool. It's really fond memories: happy days, DIY days,

It's a tough slog for a European band to break into the North American market. High work visa costs, expensive travel between cities distanced by hundreds—if not thousands—of miles add logistical nightmares to the fact that the North American market is so flooded with new music that you've got to be special to have even a small hope of rising above it all to be heard. Fortunately, UK's Portico Quartet has something special—a number of things special, in fact. And a near-capacity house at Montreal's L'Astral got the opportunity to find out just how special Portico Quartet was, during two sets at the end of a seven-date tour that brought the group to North America for the first time.

"It's certainly been enlightening and eye opening," said drummer Duncan Bellamy, during the group's sound check the afternoon of October 2, 2010. "It's been great to come to the States and Canada to do these dates, but the first few gigs were really hard. We started in New York, with a couple days off, and that was lot of fun, but then we went to Iowa—nothing against Iowa—but it was kind of strange, staying in motels on the side of highways; it's a bit bleak, really. There were some days where we were just killing time. But the gigs we've had in New York, Boston, and Philadelphia were really cool. On the whole, the audiences have liked what we're doing, but they seemed pretty baffled in Cedar Rapids [Iowa], though they [the organizers] were really nice guys."

It's no surprise that an audience of largely 60-plus year-olds in Cedar Rapids would have a hard time with Portico, despite the group playing music that's inherently approachable, its distinctive sound revolving around Nick Mulvey's unusual setup of three hangs—an instrument created by two Swiss sculptors that, designed primarily for use in spiritual/meditative pursuits, is being used almost contrary to its inventors' wishes by the group. So much so, in fact, that it's become a bit of a struggle for the group to obtain the instrument in desired custom tunings, as the hang's creators have become a touch resistant to the way Portico is using their invention. Sounding something like a cross between steel pan drums, gongs, gamelans and other tuned metal percussion instruments, Mulvey currently uses two hangs with its eight indentations tuned the same (a C-Minor chord) and a third tuned to D-Major. It was remarkable, watching Mulvey navigate these three flying saucer-shaped instruments, especially, at times, with four mallets; vibraphonists like Gary Burton, Joe Locke and Mike Mainieri are impressive enough, but their instrument is flat, and in a straight line; here, Mulvey has to navigate with almost superhuman dexterity, to play three hangs where the notes are in a circle, around the circumference of the instrument.

Portico's star has been on the ascendancy for the past couple years, first with its 2007 Babel debut, Knee Deep in the North Sea. but even more so with 2009's Isla, released on Peter Gabriel's Real World label and nominated for the UK's prestigious Mercury Prize. Now, with Isla seeing North American release (with a bonus track) and Knee Deep, now also on Real World, not far behind, the group is methodically pushing its boundaries—both geographically and musically. While saxophonist Jack Wyllie has been utilizing electronics since the group's inception, both Bellamy and bassist Milo Fitzpatrick are now incorporating processing as well, with the drummer actually taking a line from Wyllie—not unlike live sampler Jan Bang, of Punkt Festival fame—and feeding it, along with his own kit, through the use of contact microphones, into a computer to give Portico a broader sonic palette than ever before. 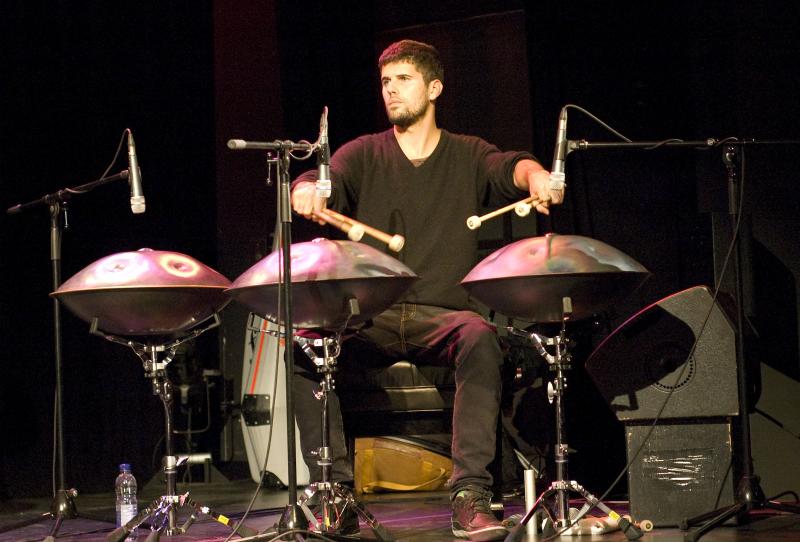 But it's a relatively recent development. "I started sampling [Wyllie's] sax in the spring of this year [2010], during our UK tour," said Bellamy. "I tried having a drum pad to trigger MIDI stuff with a laptop, but initially it just wasn't that good, because I couldn't improvise that much with it—or maybe I just didn't know the software. But what appeals to me is having the idea of contact mikes to grab real sounds."

The increased use of electronics, heard at the show from Bellamy, Wyllie and Fitzpatrick—whose use of delay, reverb and looping while bowing his bass, created an orchestral effect, at times, not unlike Norwegian bassist Arild Andersen—is a hint at what's to come when Portico "begins to think about writing" the next album in January, 2011, as Wyllie described it. "Our writing process has really changed over time," Wyllie continued. "We started off doing a lot of busking, and sometimes we'd write while we were busking, or someone would bring an idea in and we'd jam that about...and it was all quite easygoing. But then, with the second album, we basically wrote it in a shed in the back of our garden—a big shed. That was much more of a group thing, taking ideas out of jams, and going a bit deeper into music. I don't know what it's going to be like this time around; I mean, we've been doing quite a lot of work on laptops, developing the production side of things. I think I may be playing more synth, and maybe not the hang on too many tracks, to change it up a bit." 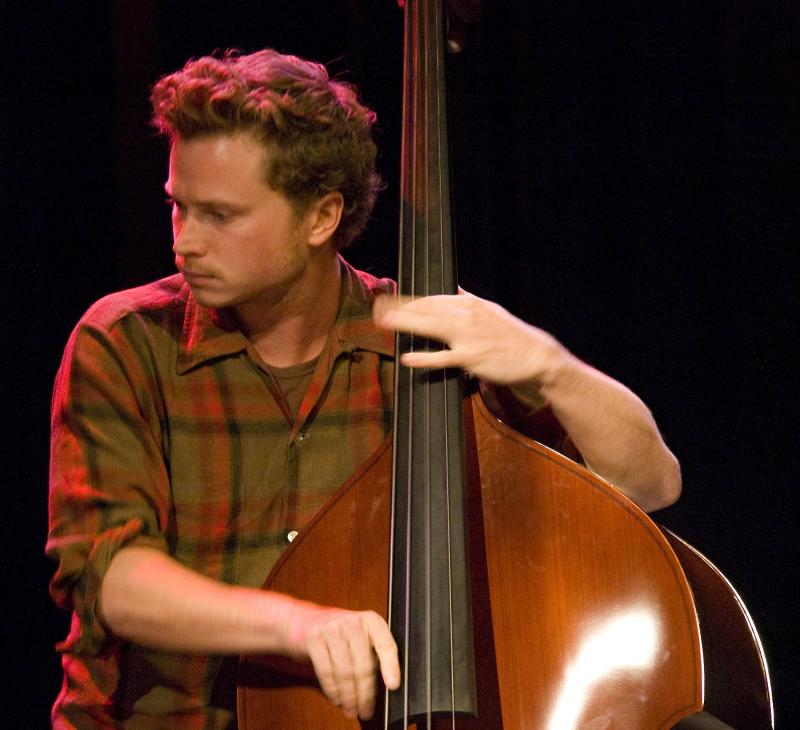 Both Wyllie and Bellamy can be heard playing hang in the studio; live it was all Mulvey, who also acted as the group's spokesperson, introducing the band and the songs, during its two relatively brief sets. Improvisation is a part of what Portico does, and live it did take more liberties and time with its material, but equally, this was not a group about extended improvisation or, even when it did extemporize, a preponderance of "look at me" pyrotechnics. Instead, this group of four distinct players—who have pretty much lived in each others' pockets for the past few years, first, gaining a reputation busking in the UK and mainland Europe—were clearly about ensemble sound and collective interpretation. "We last busked two years ago," said Bellamy, "but when we played Philadelphia, there was a guy with his wife, who had seen us busking in London, and now they're back here, and saw us, which was cool. It's really fond memories: happy days, DIY [do it yourself] days, burning our own CDs with recordings from gigs that people sent to us; we didn't have any money [for a recording studio]."

Portico's Montreal show focused heavily on material from Isla, performing seven of its ten tracks (the American version expands the original's nine tracks with the addition of the vibrant "Su-Bo's Mental Breakdown," the second song in the group's first set). Comparison's to minimalist composer Steve Reich are understandable, with the at-times Gamelan-like sound of Mulvey's hangs, and his predilection for repeated patterns that sometimes develop so slowly, and so hypnotically, that it's only after a few minutes that it becomes clear how much he's evolved—not unlike Swiss pianist Nik Bärtsch and his "Ritual Groove Music."

But Portico is more inherently song-focused than Bärtsch, with relevant comparisons to groups like Radiohead and, perhaps even more so, the boundary-busting Norwegian group Jaga Jazzist. But whereas Jaga leans towards heavily structured pieces with minimal room for soloing—and a much bigger group sound, ranging regularly from a nonet to a dectet—Portico finds a happy middle ground, building its material from the ground up but leaving some breathing space, mostly for Wylie, whose tenor and curved soprano may be conventional instruments, but his mix of acoustic techniques and electronics give him a sound like no other. The curved soprano creates a warmer sound in the lower register, a sound made famous by another Norwegian, saxophonist Jan Garbarek; but Wyllie's tone is warmer still, and his approach—not unlike Garbarek, paying attention to the truth and tone of every note he plays—is equally more disposed towards the occasional rapid-fire passage, revealing a virtuosity that Wyllie keeps in careful check, only letting go when the time is right. 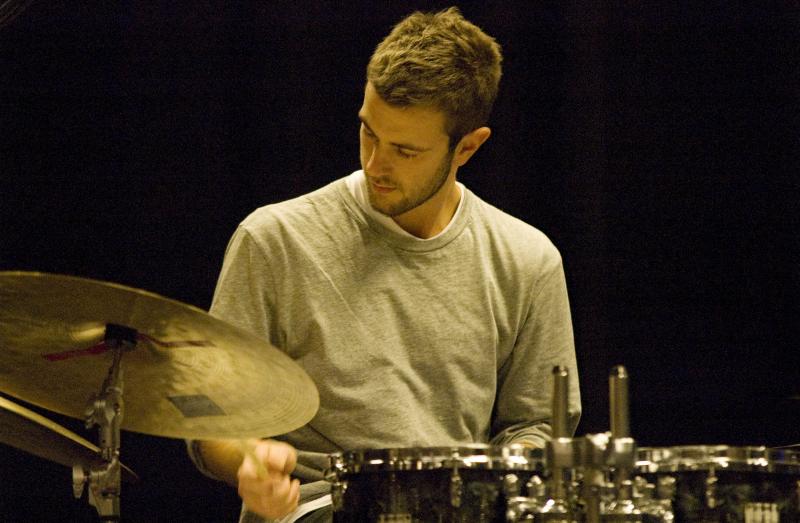 Surprisingly, perhaps, for a group that's been reaching cross-over audiences well outside the purview of jazz, in performance Portico is not a loud band. Instead, Bellamy played with a delicate and controlled touch, often employing brushes, and even when he switched to sticks and began delivering a backbeat-driven pulse, it was always sympathetic to the nuances of the hang, whose overtones are best heard at a near-acoustic level. Playing at a lower volume also encouraged its audience to pay closer attention; sometimes more people can be engaged by pulling them in to listen, rather than assaulting them with music so loud it that can't be ignored. 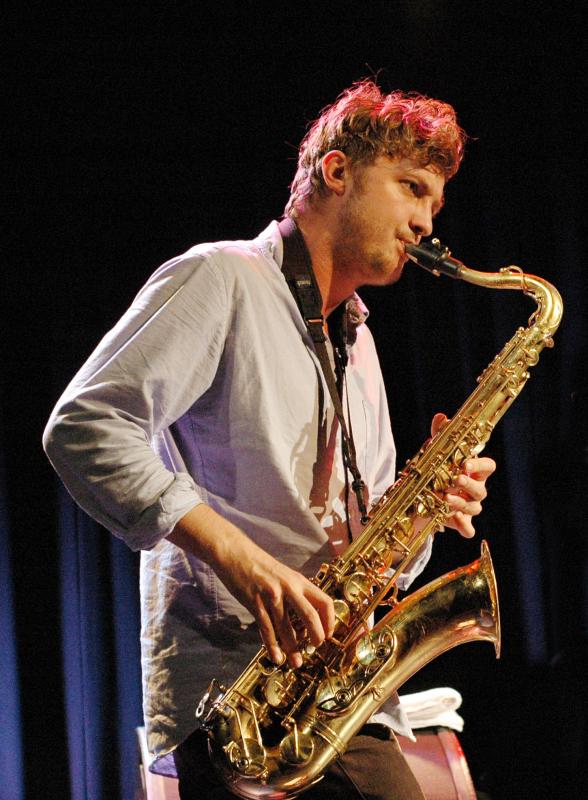 The group also drew on material from Knee Deep with "News from Verona" and the lyrical title track—the latter, a well-deserved and loudly demanded encore from the appreciative crowd. Portico also played one piece from its limited digital release Black & White Sessions (Bowers & Wilkins, 2009), recorded at Real World's studio, and the foot in the door for the group that led to its signing with Gabriel's label. Grooving with a faux-Latin pulse from Fitzpatrick but bolstered by Mulvey's relentless quarter-note patterns, it built to one of the group's most feverish pitches, a perfect ending to the set.

Heading back to the UK the next morning, Wyllie and Bellamy shed a little light on what's in store for Portico in the near future: "We've toured so hard, from February [2010] through to now, we've had maybe a total of four weeks off—maybe," said Bellamy. "We must have done getting on 100 gigs, and we've 40 more to the end of this year." "We've done a lot of gigs that haven't really been about the money, but have been about spreading the word," added Wyllie. "It looks like we might be coming back for Winterfest in New York, next year; we'll be starting to think about writing in January, but we'll also, probably, be doing a remix album of some live stuff that we've done, maybe with some overdubs."

A live album to document Portico Quartet's growing interest in electronics, and how that is reshaping its existing repertoire, would certainly appeal to the Montreal audience that, after the show, lined up in great numbers to buy Knee Deep in the North Sea and Isla. And who knows? Maybe there'll be a market for the disc in Cedar Rapids, Iowa, too.