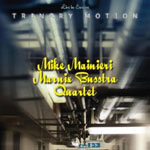 Looking more like a man in his fifties than his 72 years, vibraphonist Mike Mainieri has been stepping up the pace, with three fine but stylistically different albums in the last year: Crescent (NYC, 2010), an elegant and moving John Coltrane tribute with recently departed alto great Charlie Mariano; 2.0 (NYC, 2010), celebrating the return of the groove-heavy 1970s collective, L'Image; and Twelve Pieces (NYC, 2009), documenting his ongoing relationship with Marnix Busstra and the Dutch guitarist's trio. Trinary Motion: Live in Europe reunites Mainieri and Busstra, its substantial growth and inevitable rewards the result of touring in the two years since Twelve Pieces's 2006 recording.

Culled from three Belgian and Dutch 2008 dates, and reprising seven of Twelve Pieces' tracks, Trinary Motion shines a spotlight on the differences between live and studio dates—neither better nor worse than the other; instead, with different intent, approach and, consequently, result. Even order of events can alter not just an individual song, but the entire arc of a set. Rather than as a transition between the modal exploration of "Lost in Little Spain," featuring Busstra's sitar and its droning undercurrent, and the gentle ballad, "It's Done," a subtly fierier version of "Piece" opens the two-disc set. Dispensing with Mainieri's a capella vibraphone intro, the quartet gets right down to business, with drummer Pieter Bast's soft but propulsive brush work driving a tune that, at nearly double the original's length, provides Busstra and Mainieri a chance to set an early high bar.

Busstra's allegiance to Pat Metheny's lyricism and virtuosity is even more pronounced, especially on the gentle "My Good Leg," where Busstra lift's the signature opening line from Metheny's "Bright Size Life." Insofar as Busstra's vernacular and tone—largely warm and woody, but occasionally tart, as on the paradoxically swinging yet airy "Don't Break Step"—are referential, Busstra's ability to move inside and out of the harmonic center is equally reminiscent of another guitar great, John Scofield.

Once again, Busstra contributes the majority of the material. The quartet reprises Mainieri's gritty "All in a Row" with the same brevity and focus, while on the vibraphonist's title track, his relaxed delivery contrasts with a subtle undercurrent of bustling activity from Bast's fervent ride cymbal. Mainieri also provides a compelling rework of Joe Zawinul's "Young and Fine," its vital arrangement driving Mainieri and Busstra to turn in some of their best solo work, bolstered by Bast and bassist Eric van der Westen's unshakable yet thoroughly-responsive support.

Approaching freer terrain on a closing medley of Twelve Pieces' bouzouki-driven "Square Brown" and "From Father to Friend," drum and bass solos lead to a blistering guitar solo, where Busstra once and for all distances himself from his influences, while harkening back to his earlier fusion days. Delivering solo-after-solo of inventive perfection, Mainieri consistently elevates an album built on the energy of live performance, but without unnecessary histrionics and longwinded excess. Instead, with its combination of concise interplay and memorable material, everything is as it should be on Trinary Motion, representing continued growth for Busstra and his trio, and some of Mainieri's best playing ever.