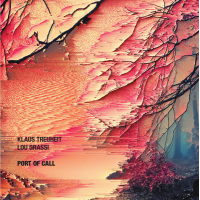 German pianist Klaus Treuheit and American drummer Lou Grassi present a further instalment of an irregular collaboration on the limited edition LP Port Of Call. Treuheit may not be familiar to many outside his homeland, but he maintains an active schedule based around European radio stations and has contributed film music for the likes of Finnish director Aki Kaurismäki. Currently best known as part of the cooperative Nu Band, Grassi has also lead his own Po Band units in the past, featuring guests such as Joseph Jarman, Marshall Allen and Burton Greene, and also engages in more traditional arenas with his Dixie Peppers outfit.

There's a largely playful feel to their spontaneous but enigmatic duets. The dozen short cuts on the 42-minute set are grouped under three headings. Although the first four tracks are titled "Misterioso" they are credited to the two participants rather than Thelonious Monk. Although none of them overtly resemble the original, it's hard not to bear his famous seesawing composition in mind, meaning that any perceived echoes discerned may or may not be there.

Given his background, it's no surprise that Grassi often keeps free time with buoyant cross rhythms. In response, Treuheit takes a less predictable path, either cutting across as on "I" where he occasionally strokes the strings, and also evokes Cecil Taylor in his percussiveness, or matching Grassi with patterns of his own as he does on the heavy blues inflections of "IV."

The second group, named "L'Espace Sonore" appear more conversational. A timbral exchange occurs on "I" As Grassi's tappy cowbell cadences are met by Treuheit's dampened piano keys, before pattering drums vie with scurrying runs. Perversely, "III" is the piece that sounds most Monkish on the disc with its wide intervals and odd ringing accents.

Belying the title there's nothing maudlin or elegiac in the third grouping, credited solely to Treuheit, "Lament #PB," as borne out by the pacy breathless dash and dark chording of "I." Although the two principals play together most of the time, Grassi's brief breaks here amid the pulsing piano lines constitute one of the few exceptions. By contrast "II" is more transparent and cerebral, while Treuheit channels Matthew Shipp with his insistent pounding chords over Grassi's dancing swing on "III." "IV" brings the album to an introspective close, but by the end Treuheit remains as hard to pin down and mysterious as ever.