Home » Jazz Articles » San Francisco String Trio: May I Introduce To You 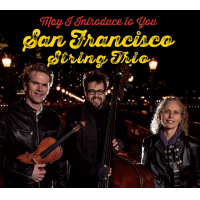 Fifty years after its release, The Beatles masterpiece, Sgt. Pepper's Lonely Hearts Club Band, has not only seen a resurgence in its popularity, but a slew of inquisitive musicians continue to glean from its creative depths. May I Introduce To You is an intellectual tribute to this iconic album by the San Francisco String Trio, who discovered a treasure trove of material for musical exploration, setting a new standard for jazz interpretation of the Fab Four.

The trio is made up of multi-faceted guitarist Mimi Fox, violinist Mads Tolling, and bassist/vocalist Jeff Denson, accomplished musicians, educators, and colleagues at the California Jazz Conservatory. The album is reimagined in its entirety, though in a different song order, all three members naturally taking improvisational liberties, while adhering to the familiar melodic structure of the songs.

They open the set with "When I'm Sixty Four," Tolling playing the lyrical lines, Fox doing the first lead, Denson taking them into the spontaneous deep end and back. The ethereal intro of "Lucy In The Sky With Diamonds," falls into a 5/4 tempo with interesting interplay between Fox and Tolling, as he alternately plucks and bows on his violin, a technique he utilizes frequently. Denson takes center stage as vocalist on "Fixing A Hole," displaying the ideal range and nuances required. Fox switches to a twelve string acoustic to authenticate George Harrison's "Within You Without You," following the original Indian inclinations with imaginary sitar and tabla voicings, anchored by a distinctive ethnic lay cadence.

"With A Little Help From My Friends," has a blues infused tango sway to it, and "Being For The Benefit Of Mr. Kite," retains its festive circus atmosphere, both of these illustrative of the improvisational dynamics on the record. They convert "Lovely Rita," into a pensive jazz waltz, as all melodic and harmonic possibilities are explored. Denson reprises as singer on "Getting Better," and on "A Day In The Life," a tour de force that swells into a spiraling classical inspired mid-section, then somebody spoke and we went into a dream.

There was always a bright and cheery aspect to "Good Morning Good Morning," and the group maintains the positive direction by giving it an uplifting swing sensation. Fox performs unaccompanied on the melancholic "She's Leaving Home," playing against her own bass and chord tones, executing an inspiring interpretation. There is an undulating rhythmic undertone to "Sgt. Pepper's Lonely Hearts Club Band," that goes from gypsy jazz to rock and roll in an astute circular pattern, ending the record with the song that ushered in a new era in popular music.

With May I Introduce To You the San Francisco String Trio transform Sgt. Pepper's into a multi-dimensional extension of themselves. Their musical proficiency is rivaled only by the chemistry that is evident in the project; music performed by technical wunderkinds, but pleasing and accessible to those who appreciate a contemporary jazz twist on familiar songs.

When I’m Sixty-Four; Lucy In The Sky With Diamonds; Fixing A Hole; Within You Without You; With A Little Help From My Friends; Being For The Benefit Of Mr. Kite; Lovely Rita; Betting Better; Good Morning Good Morning; She’s Leaving Home; A Day In The Life; Sgt. Pepper’s Lonely Hearts Club Band.

Title: May I Introduce To You | Year Released: 2017 | Record Label: Ridgeway Records