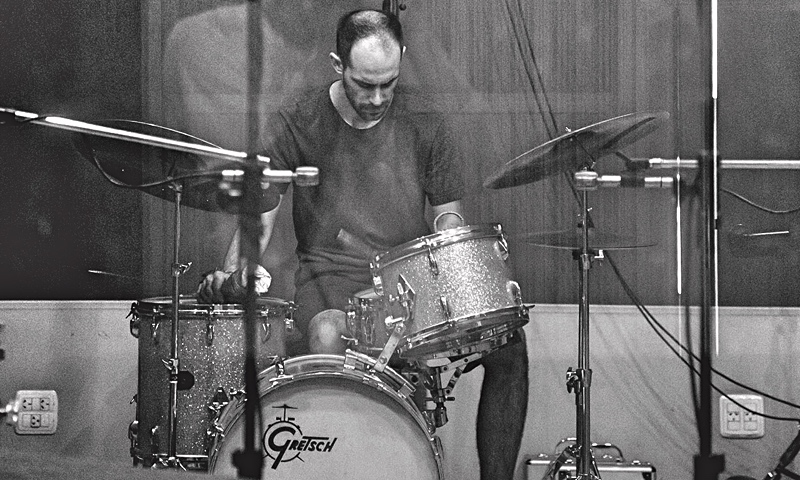 BY JAKOB BAEKGAARD
August 22, 2017
Sign in to view read count

Playing a solo set always seemed very interesting to me. I think every musician should do it; it’s a way of self-awareness. You’re alone with your instrument and with silence, you have to shape that silence with sounds.
—Pablo Diaz

Rhythm is in our body and in our blood. The heart beats and our pulse is a sign of life. Instinctively, humans have connected themselves with rhythm from early days until the present. Just think of ancient tribe rituals or the mechanic trance of a techno party.

"I don't come from a musical family, but in some way, and for some reason, I needed to start with this, with music. There were some musicians in the family, some cousins, and I had an uncle who had a great stereo and a big collection of LPs, and I also had an aunt who had a piano and I spent time playing with it when I came back from the kindergarten."

At the age of thirteen, Diaz started focusing on the drums, with the unlikely inspiration coming from the rock group, The Pretenders:

"My parents bought my first drum set when I was thirteen. I had listened to The Pretenders and I don't know why I had decided I wanted a drum set. I think I wanted to make music no matter the instrument. I started to study the drum set and I got into it. I think the instrument is a tool, a vehicle through which one expresses oneself. I guess I needed to express myself and the drums set came into my way."

After deciding on the drums as a vehicle for expressing himself, Diaz also expanded his horizon musically and took lessons to learn more:

"I started with lessons and I knew other kinds of music, like progressive rock, fusion and jazz. At the age of seventeen I started to study with Daniel Piazzolla, the grandson of Astor. From then on I decided I wanted to make music my way of life. After that I got into a music school and I also studied with several drums masters from Argentina. At the age of twenty one I started to play with trumpetist and pianist Enrique Norris, and he changed my way of playing music, of listening to music, my view about music. I got involved with improvisation."

In the process, Diaz also listened to several albums and the first crucial jazz experience was Miles Davis' Four & More (Columbia, 1966): "It was the first jazz album I listened to deeply." Many albums followed since then, but Diaz is reluctant about speaking of specific sources of inspiration, including drummers:

"I don't have a good memory for these things... I'm not a fan of drummers either, I'm a fan of music. I admire musicians, artists, people who express themselves through creative ways of arts... I can't name a few, I would leave too many people out!"

At this point, Diaz is playing a type of jazz that could be connected with the free jazz tradition and it is an approach that he has developed gradually:

"It has developed through the years, absolutely... but it has always been present on me, on my search. I mean, I started to play this music seriously with Enrique Norris, who knows why I met him? But I met him. If you know Enrique, you know that he is one of the masters of free jazz and improvisation in jazz in Argentina... he's a great artist, a creative person. I developed much of my way of making music with him and since playing with him, I wanted to play music freely whether it is written music, graphic music, improvisation or experimental, and I'm looking for this feeling all the time, in music, in arts and in life. They are the same things for me."

Diaz comes from Argentina, but the heritage of his country is not a direct inspiration, although it is in his blood: "I've never been really close with folk music, but I believe that it's in my background, somewhere. Maybe in the feel, in the way of playing, in the melodies, in the rhythms of course." 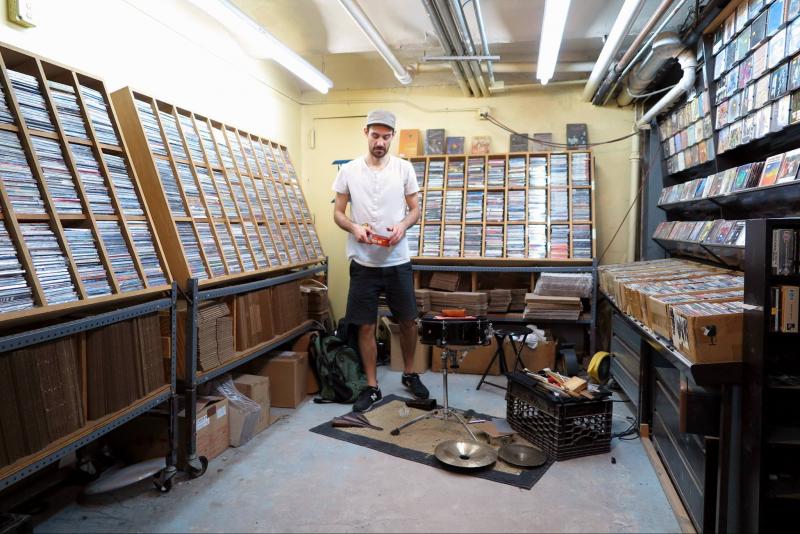 The rhythms are the main thing on his new solo album Los Transitorios Presentes. A title, Diaz explains in the following way: "It means 'the transitional today' or 'the impermanent existence.' it came from the Buddhist term impermanence, which says that all existence is transient, evanescent, inconstant."

The idea of recording a solo set had been lingering for some time and eventually Diaz just went into the studio:

"I had been thinking about it for a year approximately. Trying to find the way, researching the concept of the way to play, but I couldn't set up anything, so I decided to book a studio, go and play. And it is what I did."

It was a very natural process and Diaz specifically searched for his own sound without studying particular drum records before he went into the studio: "I didn't want references. I've listened to solo sets records, of course, but not to get ideas for this project."

On the album, Diaz both uses the familiar sounds of the drum set and more strange sources of sound:

"In the album I use a classic drum set, two cymbals and a bunch of percussion stuff, like old and strange cymbals, bells, and I also use a bow and objects I have collected, which I use in a particular way to get a specific sound"

The result is a sound that is very spiritual and Diaz also sees the solo session as a way of achieving growth musically:

"Playing a solo set always seemed very interesting to me. I think every musician should do it; it's a way of self-awareness. You're alone with your instrument and with silence, you have to shape that silence with sounds... First, it is terrifying, you know, you have to deal with yourself deeply, but then, when you get into it it's amazing. I recommend it."

Elaborating on the relationship between silence and sounds, Diaz says:

"Silence and sound are the same thing, two sides of the same coin. But silence means not sounding, and what we learn when we start to play music is to make sounds. So, we set silence aside and go into sound, play and play... but I believe that music needs both things to be completed. One have to give the attention to both things. You can find sound in the silence and vice versa. I try to find a balance between these two qualities of music."

The holistic approach to music is also seen in the way Diaz thinks about the connection between his music and nature, the life that surrounds us:

"Nature and improvisation are in relationship, totally. Nature is a free improviser, it adapts and uses the environment for its development; nature itself has the essential force of creation; nature is the best example of freedom. So, one is part of nature and I believe that one needs to be aware of it in order to play freely, to improvise sincerely, with or without structures, no matter what kind of music, we're talking about the human being expressing him/herself."

Drumming is not usually connected with making melodies, but Diaz has a way of making his instruments sing. About his approach he says:

"You can find rhythm, melody and texture in every sound. Maybe sometime one highlights one of these features, but the others are present anyway. I try to pay attention to these three features in the sounds I'm playing, and I try to develop them. A melody on a drum set is defined by what, how and why you are playing what you are playing. The melody is not a series of notes necessarily, it's the intention, the precedence and the destination of the phrase, no matter the notes and the tuning, the idea matters, the concept behind the phrase matters."

While Diaz is shaping sounds, he doesn't think of himself as a composer:

"I compose, but I don't consider myself a composer. I'm more like an improvised composer. I just sit in front of the piano and play with notes, melodies, vamps and ideas, until I find something which sounds good to me. Then I try to develop it and bring it to a group in a rehearsal, the other musicians are the ones who finish the tune. I don't believe in getting inspired, but I believe in being inspired by everything that happens around one. It's unavoidable, but the thing is some people are more aware and some people not. I don't try to get inspired by anything. I try to do several things, like be in touch with other art forms, because I know I'll be inspired by them." 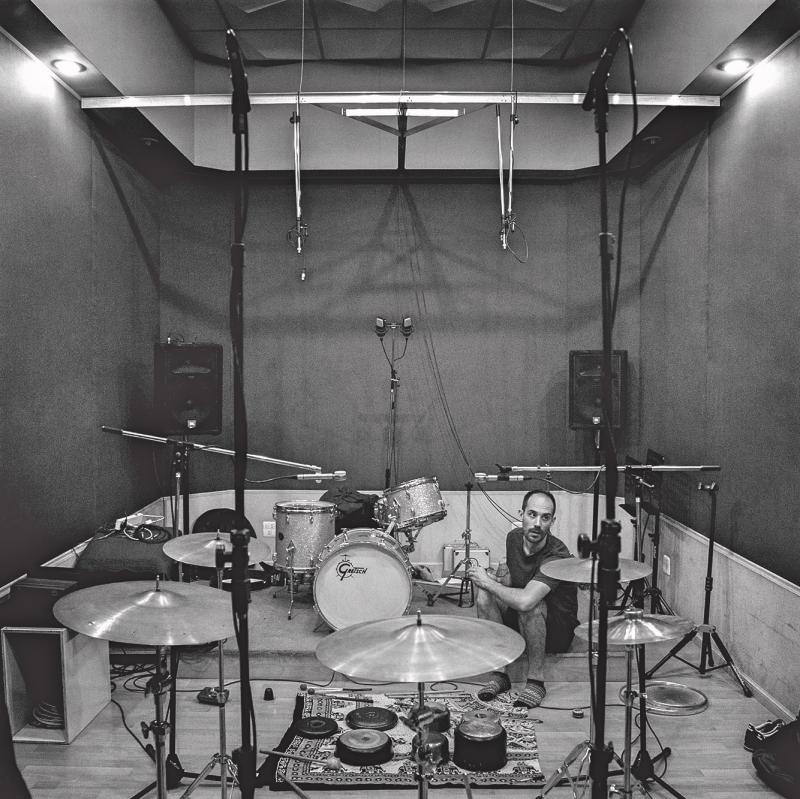 Doing many things means playing in many different projects, including the acclaimed SLD trio with the pianist Paula Shocron:

"I'm lucky to be involved in several projects I like; in these last years the most I've been doing was working with Paula Shocron, touring and recording with different musicians from different places, here in Buenos Aires or in New York, where we've been going once a year. We are working on some recordings we made. One with William Parker, one with saxophonist Christoph Gallio, one with the great clarinetist Guillermo Gregorio and the last one with singer Kristin Norderval."

"Besides this, I continue work with the trio of Enrique Norris. I'm part of the non-profit organization of arts Creatividad en Movimiento, among others projects of free improvisation as well as written music. I also work with the SLD Trío with Paula Shocron and Germán Lamonega, and we have our last release Tensegridad on HatHut. This album was a surprise for us... Werner X. Uehlinger asked us for our first album Anfitrion. He was interested in listening to it. We sent a copy and after a couple of weeks he offered us to make a new recording. We're really glad with this new one."

With his many projects and plans, Diaz continues to divide his time between his home country, America and possibly Europe:

"Well, one of my plans is to try to tour as much as I can. It's more difficult than Buenos Aires, but I'm thinking of Europe next year. I think that the new release on HatHut can be a gate to go there, also the music I'm making for Nendo Dango Records, as well as the projects which Paula and I are working on."

"If you want to catch me playing live, a big part of the year I'm in Buenos Aires, playing on the underground scene; I live in the city, where I have my work as educator. I also play in different cities around Argentina, and once a year, at least, I try to move out of the country, to New York, or to somewhere in America, Europe or wherever."

No matter where he goes, one can be sure that Diaz will play the rhythms of life that have shaped his own being and will continue to do so.